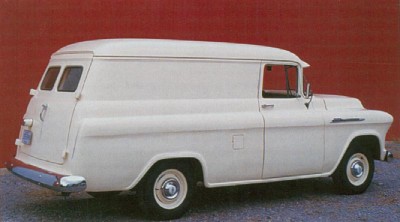 The year 1955 was like the Fourth of July and Christmas rolled into one: fireworks and genuine surprises. Everything burst out new, truly new, each car and truck different, totally transformed -- even the 1955 Chevrolet Light-Duty Truck.

It was surprising that Chevrolet was all new for 1955, since Chevrolet always tended to be conservative: same Stovebolt Six every year, same vanilla styling. But not for 1955. Here came the new Chevrolet looking like a baby Cadillac with a Ferrari grille. And it had this wonderful little jewel of an ohv V-8, again like Cadillac. Merry Christmas!

Christmas for Chevrolet's truck lines, though, came slightly delayed. While the division introduced its new passenger cars on October 28, 1954, the revamped trucks weren't ready until March 1955. Until then, Chevrolet continued the 1954 trucks pretty much unchanged.

These early 1955 trucks were called the "First Series." The totally changed "Second Series" wasn't released until late March. But this was no big problem, because Ford's 1955 trucks turned out to be rehashes of the 1954 models, and Dodge would also be late in releasing its 1955 C-3s -- later even than Chevrolet.

Even though the First Series 1955 trucks looked the same as Chevrolet's 1954 models, they did introduce two significant mechanical improvements: a Hotchkiss open driveshaft and a revised three-speed synchromesh transmission. Both carried over into the Second Series.

Finally released on March 25, 1955, the Second Series Chevrolet trucks had that 1955 look. Not many parts carried over from the First Series; the open driveshaft, yes, and the re-engineered three-speed. But the most important carryover was the Thriftmaster six-cylinder engine.

The six had been considerably upgraded for 1954 with a new cylinder head, a more rigid crankshaft, different pistons and connecting rods, beefier bearings, bigger bulkheads, a higher-pressure oil pump, and revised rocker studs. Displacement was hiked to 235.5 cubic inches and output stood at 112 horsepower.

Aside from the aforementioned running-gear items, everything else in the 1955s was genuinely new and as different mechanically as anything General Motors brought out that season. Plus this was a great year for firsts. Chevrolet put the first 12-volt electrical system into its light trucks, the first overdrives, the first power steering, and, of course, the first iteration of the new small-block V-8.

The Second Series also launched the first Cameo Carrier, and here's where the fun really started. The Cameo was probably the most significant first of the lot.

Before 1955, "glamour" was not a word often applied to Chevrolet pickups. General Motors, in fact, never made a big deal about the appearance of its truck fleet. Trucks were trucks; they needn't look like they'd just come from the beauty parlor. But here, suddenly, stood this sexy 1955 pickup, and you couldn't help but do a double take.

Working in their own little world, Chevrolet truck designers borrowed just enough high-fashion touches from car styling to create light-duty vehicles as handsome as they were handy starting in 1955. Their impact is still being felt.

For more on the 1955 Chevrolet light-duty trucks, continue to the next page.