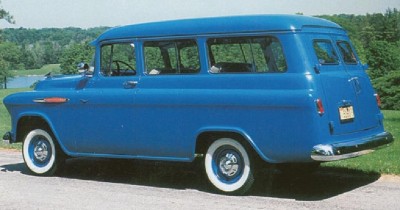 Buyers of the Suburban Carryall wagon had a choice of parallel vertical panel doors or a more station-wagonlike two-piece tailgate.

There were four transmissions among the 1955 Chevrolet light-duty truck options: a three-speed manual, three-speed with overdrive, heavy duty four-speed, and four-speed Hydra-Matic. Trucks in the 3100 through 3600 series came standard with the column-activated three-speed; 3800s used the floor-shift four-speed.

The switch from torque-tube drive to an open Hotchkiss driveshaft freed the transmission tailshaft from its previous role as a load-bearing member of the drive train. (With the torque tube, the entire driveline, including the transmission, was subjected to shock loads with each shift, each brake application, and each bump encountered by the rear axle.) Also, the tail housing grew longer and was now detachable. This made repairs easier and also provided space for the optional overdrive unit.

In the standard three-speed, another big improvement was the heavying-up of the transmission mainshaft. Making the mainshaft thicker gave it greater torsional rigidity and minimized gear misalignment. Synchronizer drums became larger for easier, more positive shifts. And the ends of the sliding gear teeth and the mating ends of the counter gear and reverse idler were now rounded rather than chamfered, so there was less likelihood of chipping. If teeth did chip, the engineers provided a "chip collector" near the drain plug at the bottom of the transmission case to catch metallic debris.

While the manual three-speed remained the most popular transmission, Chevrolet made Warner Gear overdrive available for ½-ton trucks for the first time in 1955. Warner overdrive was, in effect, a two-speed planetary gearset inside the transmission tailshaft housing. Standard differential ratio with overdrive was 4.11:1 versus 3.90:1 with other transmissions. The 4.11 ratio gave an excellent launch, acceleration, and pulling power, yet the overdrive kept the engine quiet and rpm low during cruising.

The driver could upshift into overdrive at any speed above 31 mph by simply lifting his foot off the gas pedal. To downshift, he engaged a switch by flooring the accelerator. Or the unit would downshift automatically at speeds below 27 mph. Overdrive reduced engine speed by 30 percent so that at 60 mph, the engine would typically turn 2,100 rpm in overdrive as opposed to 3,000 rpm without it. Fuel savings were equivalent.

The only automatic transmission offered in 1955-1957 Chevrolet light duty trucks was GM's four-speed Hydra-Matic, and it was available with the six and the V-8. The truck Hydra-Matic was the same unit used by Cadillac and Oldsmobile. The manual four-speed was a heavy-duty unit with a stump-puller low gear; it wasn't the sort of performance four-speed that became popular soon afterward.

An add-on-type power steering unit became available in 1955, with the hydraulic pump bolted to the rear of the 12-volt generator. The power cylinder was anchored firmly to the beam front axle and applied power directly to the tie rod. Normal "manual" steering was always available if the engine quit, because the pump was an open type that allowed easy recirculation when not powered. Vacuum power drum brakes were also available in light duties.

"Flite-Ride" pickup cabs came in standard and custom versions. The standard cab had a small rear window; the custom cab's glass wrapped around to give 902 square inches of viewing area versus 386 for the small 1955 backlight. Gone were the rear corner windows of 1954 and previous models. (The wraparound rear window could be had as an option in the standard 1955 cab.) Total glass area was up 25 percent for the small-backlight cab and 37 percent with the wraparound rear window.

To explore the 1955 Chevrolet trucks' interior features, continue to the next page.