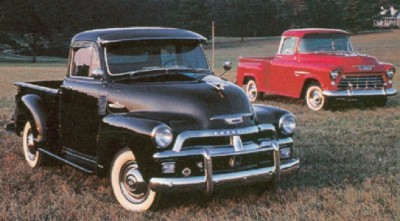 The 1955 Chevrolet light-duty trucks were obviously and successfully cut from the same cloth as Chevrolet's new passenger cars. The standard line of 1955 trucks had the same type of wraparound windshield -- another first in the truck field.

Gone were the traditional hang-on front fenders. The 1955 fenders flowed smoothly back into the doors and down over the recessed step plates. On pickups, the beltline swept around behind the cab. Hooded headlamps, which GM introduced on the 1953 Cadillac, came to Chevrolet cars for 1955 and now also appeared on the trucks, as did Chevrolet's Ferrari-inspired eggcrate grille.

The man who directed Chevrolet's truck styling operation was a designer named Lu Stier. Stier and his tiny staff occupied an out-of-the-way studio in one corner of GM's Assembly Plant No. 8, a place known fondly as Planet 8.

Planet 8 stood a brisk 15-minute walk west of the General Motors Building near downtown Detroit. And to put this all in spatial perspective, directly behind the GM Building, in the so-called Argonaut Building, the top four floors were occupied by General Motors Styling, the hub of all GM body-design activity.

Stier, off by himself on Planet 8, was left alone more than other studio heads. Even so, he knew what was going on in Chevrolet's passenger-car area. The Chevrolet car studio was under the direction of Clare MacKichan, and MacKichan and Stier kept in touch.

Then, at the top of the styling pyramid, overseeing this design activity and directing the creative flow between Planet 8 and MacKichan's studio was Harley J. Earl. Earl was GM's styling boss, a vice president of the corporation no less. His designers called him "Misterl," one word, partly because he'd brought his department up from nothing to the status of an empire. In the process, Harley Earl managed to make himself one of the most indispensable people in corporate America.

By focusing on styling, Earl taught the world that the way a car looks has a lot to do with the way it sells. He also made sure that GM led the industry in styling, a supremacy he proudly maintained decade after decade. His staff revered and feared him, sometimes both at the same time, and he stood at the height of his powers during the time when the 1955 Chevrolet cars and trucks were being designed and engineered.

He took a special interest in Chevy trucks for that year, and while the regular models represented a huge leap forward, the star among ½-tonners had to be the 1955 Cameo Carrier.

The Cameo broke new ground by being Chevrolet's first-ever luxury pickup. Pickups had never had a "top of the line" before, but here suddenly one appeared. And if the standard Chevrolet pickups traced their heritage indirectly to Cadillac, the Cameo Carrier paid homage to the Eldorado. Nothing in the truck field even came close that year.

The Cameo Carrier sprang from the mind of a young designer in Lu Stier's studio named Chuck Jordan. Jordan was 25 years old when he conceived it. He'd come to GM. fresh out of the Massachusetts Institute of Technology in 1949 and, immediately after paying the usual six-month dues in an orientation studio, asked to be put into a truck studio -- a highly unusual request for an aspiring young designer.

Stier's area was next door to the orientation studio, so Chuck already knew the truck people and what they were up to. He'd entertained a passion for trucks most of his life, ever since he'd learned to drive has grandfather's 12-speed Moreland as a child. And because most other young designers wanted to design cars, Jordan saw an opportunity to do some highly original work on the other side.

To see how this work translated into changes for the 1955 Chevrolet trucks, continue to the next page.