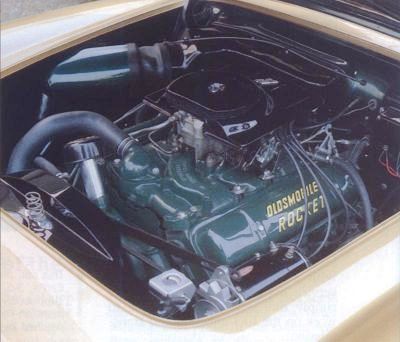 Kreuger goes on to say this about the 1954 Oldsmobile F-88, "As for the car having a six-cylinder engine . . . it definitely had a V-8. The motor mounts were set up for a V-8. . . . There were some miscellaneous parts that were detailed on this list that either were not included or were lost or something of that nature. I don't remember the specifics, but there were all kinds of scraps of paper and blueprints down in the bottoms of those crates, all folded up. They'd been in there forever, because some of them were water-stained. The crates must have stood someplace where it was wet."

The surviving Oldsmobile F-88's chassis number suggests that the car was built on a 1954 Corvette frame (E54S003701), but vintage Corvette expert John Amgwert said that it's probably not the original Motorama show car frame. The number's last four digits, 3701, mean that the frame was number 2701 out of 3640 built for 1954.

That puts the frame's manufacturing date quite late in the model year, especially since, according to Amgwert, fully a third of all 1954 Corvettes weren't sold until 1955. As for the Oldsmobile engine, its number is V2470, which makes it the 1,470th in the 1954 model run. The engine, therefore, probably is the one that was originally installed in the Motorama F-88.

"So when I got the car," continues Krueger, "the body was on the chassis, it had the Olds V-8 in it, and it had remnants in these boxes of an interior." The door panels were made of fiberglass, but the original upholstery had deteriorated, so Krueger's staff had to completely reupholster the Oldsmobile F-88. They reproduced all the original materials as faithfully as possible.

"The whole dashboard, the windshield frame, the grille, bumpers, all that stuff was all crated up. There's no way anyone could have made that stuff from scratch. It's just impossible," he says. "To the best of my memory, we had pretty much all the instrumentation. Obviously, the gauges had to be gone through. . . . You don't want to put something together [not knowing] whether it works."

According to Krueger, even the Oldsmobile F-88's windshield had been crated.

Krueger mentions that the 1954 Oldsmobile F-88's side glass is curved. He recalls that his shop had to remake the headlight bubbles, because the originals were cracked. The blueprints and black-and-white factory photos of the Oldsmobile F-88 helped immensely, he says. A fully labeled photo of the instrument panel was especially helpful, because, "Yeah, we have this part in the crate, but where does it go? What does it do?"

Now it happened that, since around 1981, Krueger had been restoring cars for Don Williams and Ken Behring at the Blackhawk Collection and Behring Auto Museum in Danville, California. Williams visited Krueger's shop regularly, and, around 1989, saw the Oldsmobile F-88, recognized its potential, and bought it even before Krueger finished putting it together. Krueger delivered the car to Williams in December 1990, just in time for the 1991 Barrett-Jackson auction.

Continue to the next page to find out what happened to the 1954 Oldsmobile F-88 during and after the Barrett-Jackson Auction -- one of the greatest car collector events in the world.