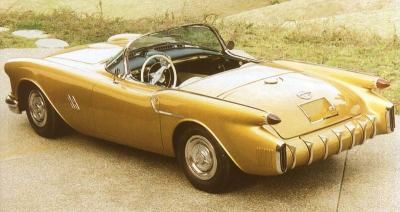 The F-88 reportedly once belonged to famed auto-industry figure E. L. Cord, who received it in dismantled form in 1955.

During the Atterbury race, three-time Indianapolis 500 winner Mauri Rose, who in 1954 worked as an engineer for Chevrolet, babysat the Oldsmobile F-88 (and presumably one or more Corvettes). When Harley Earl showed up to watch his son, Jerry, compete in the race with a new Austin-Healey, the elder Earl hopped into the Oldsmobile F-88 and drove it around the base like a proud father, much to the delight of the race crowd.

The 1954 Oldsmobile F-88, as mentioned, now belongs to Gordon Apker, the car's 12th owner. He and his wife, Janet, live on a seven-acre compound overlooking Puget Sound near Seattle. Apker founded Monarch Foods Corporation, which bought out the Shakey's Pizza chain in 1983.

Since selling both companies in 1989, he's been pursuing his passion for unusual and interesting automobiles. Apker currently owns a diverse collection of classics, special-interest cars, hot rods, customs, and exotics --some 25 in all. But it's the 1954 Oldsmobile F-88 that comes wrapped up in questions.

First, did one of the 1954 Oldsmobile F-88's burn? The story initially told to Apker was that as one of the two cars was being loaded onto a trailer, its engine caught fire. And because the handler didn't know how to open the hood, the car burned up. Yet, among many former GM employees -- including retired designers, engineers, and management personnel, many of whom were working at General Motors in 1954 -- none had ever heard of any Motorama car burning.

Another version of the underhood fire story says that Oldsmobile's chief engineer drove the golden Oldsmobile F-88 from the Lansing engineering garage to his home, with his son as his passenger. When the chief engineer parked the car in his driveway, the engine caught fire, and that's how the golden car went up in smoke. Oldsmobile's chief engineer in 1954 was Harold N. Metzel, who currently lives in Scottsdale, Arizona. Although he's suffered a stroke and has difficulty enunciating his words, he says in no uncertain terms that no car ever caught fire in his driveway.

Still another story claims that the surviving Oldsmobile F-88 escaped the crusher by being disassembled, crated, and shipped off to E.L. Cord's mansion in California. E.L. Cord? The E.L. Cord who simultaneously ran Auburn, Cord, and Duesenberg in their glory days? Yes, that Errett Lobban Cord. But the story didn't make sense. Why would the 1954 Oldsmobile F-88 be taken apart for shipment to Cord? And which Oldsmobile F-88 was it: the gold one or the red one?

Actually, there's good evidence for the truth of this story. After the 1954 Motorama tour ended, the golden Oldsmobile F-88 apparently survived intact in Lansing for about a year. After that, it disappeared, and if GM policy had been carried out, the 1954 Oldsmobile F-88 should have been destroyed.

Obviously the 1954 Oldsmobile F-88 wasn't destroyed. In addition to the car, Apker has a set of full-sized engineering blueprints that he got when he bought the F-88, and, more important -- in fact, the most important document of all -- a shipping confirmation sheet dated March 21, 1955. This bill of lading, marked "Customer Copy," was clearly one of several such documents, because it was headed "Styling Section SS-532, continuation of SS-531."

Continue reading to find out how a paper trail led to some interesting conclusions about the existence of the F-88.