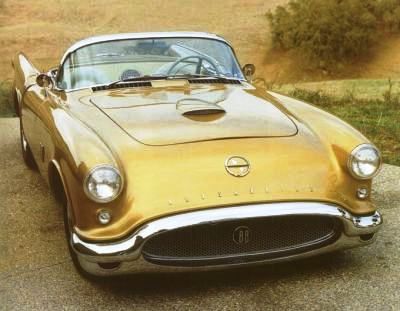 The golden Oldsmobile F-88 was a show stopper at the General Motors Motorama in 1954.

The 1954 Oldsmobile F-88, painted metallic gold with metallic green inside the fenderwells, had its first public showing at the General Motors Motorama on January 21, 1954, at the Waldorf-Astoria Hotel in New York.

The vehicle display and musical revue ran for six days, after which the Oldsmobile F-88 became part of a series of traveling Motorama shows that caravanned by bus and truck to Miami, Los Angeles, San Francisco, and Chicago. Nearly 2 million people saw the five Motoramas that season.

Back then, after a show car had completed its Motorama duties, it was usually turned over to its sponsoring division. The division's top executives were then free to do with it what they wished. They were encouraged to eventually destroy it. Although they couldn't sell such vehicles, they could and often did give them away -- usually to favored dealers, business friends, or relatives.

That's how a lot of the survivors got out of GM. The crusher mandate was often ignored because America was a less litigious place in the early Fifties. These were GM's happy days, and divisional executives didn't concern themselves with getting sued.

So the 1954 Oldsmobile F-88 apparently got trucked from GM Styling in downtown Detroit to Oldsmobile's engineering garage in Lansing, Michigan, sometime in late March or early April 1954. According to former GM show-car fabrication manager Richard Henderson, the golden Oldsmobile F-88 contained a complete powertrain, but didn't run during its time on the Motorama circuit.

However, Oldsmobile engineers soon got it going. Home movies taken in the summer of 1954 by a 15-year-old Lansing youth named Don Baron show the Oldsmobile F-88 being driven by Shriners in a downtown parade. After the golden 1954 Oldsmobile F-88 was sent to Lansing, continues Henderson, Harley Earl apparently had second thoughts about having let it go, so he ordered another one built. The twin was painted red. "That red car became Mr. Earl's other daily driver," notes Henderson.

Earl still drove the 1951 LeSabre, but he now alternated between it and the F-88. The Oldsmobile F-88 was a far simpler car than the LeSabre, making it easier to maintain. Earl's personal mechanic, Leonard McLay, always had his hands full keeping the LeSabre on the road. Not so with the Oldsmobile F-88.

"I remember taking the red F-88 to the opening of the New York Thruway," says Henderson. "I drove it there from Detroit. They had 125 miles of thruway open at that time, from about Utica to Rochester. I remember it so well because it was the first trip I took driving a show car. I was 20 years old. In front of me was Leonard McLay in the LeSabre."

"We were coming out of Windsor, Ontario, and all of a sudden I heard a siren. The cop pulled me over. I thought, 'Oh, oh, I'm getting a ticket, and I'll get fired the first trip I ever took.' But the cop just wanted to see the car."

"The second event I remember with that car . . . I drove it to Wisconsin for the opening of the Road America race course. Mr. Harley Earl cut the ribbon. This was in 1955."

There have been many so many elaborate stories about the 1954 Oldsmobile F-88 that it's tough to tell what's fact and what's fiction. In the next section read about the myths and truths behind the F-88.