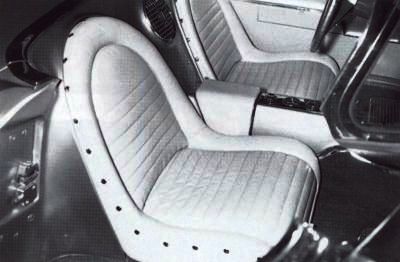 Before we examine the myths, let's review what's known about the first Oldsmobile F-88. It was designed during 1952-1953, around the same time as the first Motorama Corvette. Preliminary sketches might have come out of an experimental studio run by veteran designer Bill Lange.

The final design, though, was most likely done in the main Oldsmobile studio under the direction of Art Ross. Ross was a gifted designer who'd conceived, among other things, the 1941 Cadillac's eggcrate "tombstone" grille, the World War II Wildcat tank destroyer, and the "rocket" beltline for the 1959 Oldsmobile.

Oldsmobile interiors in the early Fifties were done under Jack Humbert, who later became Pontiac's chief designer. So it was a talented group that worked on that first Oldsmobile F-88, always, of course, under the watchful direction of GM Styling vice president Harley Earl.

In terms of technical detail, the Oldsmobile F-88 was built on the chassis of an early Chevrolet Corvette and shared the Corvette's 102-inch wheelbase. Like the Corvette, the Oldsmobile F-88's body was made of fiberglass. Styling cues like an elliptical grille mouth, "hockey stick" side trim, and bullet tail lights were purely period Oldsmobile, however.

The F-88 was powered by a hopped up 324-cubic-inch V-8 from the 1954 Oldsmobile Super 88. The Oldsmobile F-88 engine used a stock four-barrel carburetor with a tiny, flat air cleaner. The engine's 9.0:1 compression ratio plus additional -- but unrecorded -- modifications boosted the Super 88's 185 horsepower to 250 horsepower and an undisclosed amount of torque.

Power flowed through a four-speed Hydra-Matic transmission to a 3.55:1 Corvette rear axle, which, despite its origins serving a humbler six-cylinder engine, had no trouble handling the Oldsmobile V-8's torque. The F-88's only other off-the-shelf components were its instruments. Humbert took these from a 1953 Oldsmobile, turned the speedometer into a combined speedo/tach, and gave the other three dials custom faces.

During its brief tenure as a Motorama show car, the Oldsmobile F-88 shared the stage with the Oldsmobile Cutlass fastback coupe. The Cutlass' instrument panel, set vertically in a central stack, was identical to the F-88's.

After all of the blood, sweat, and tears, the Oldsmobile F-88 was finally ready for its first public appearance. Continue to the next page to read about this much-anticipated debut.