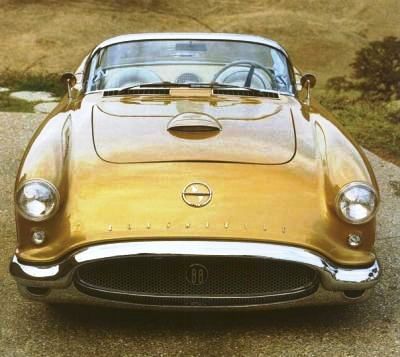 The 1954 Oldsmobile F-88 had a long, strange trip filled with mystery, myth, and motoramas. Throughout the Fifties, the grandest expressions of General Motors' visions of the automobile's future routinely went on display at the corporation's Motorama shows. But once out of the spotlight, GM's "dream cars" were supposed to be destroyed. This is the story of one that beat the odds -- and its odyssey through the world of car collecting.

General Motors in the Eighties was awash in policies, plans, and projects as it tried to maintain its equilibrium in a rapidly changing industry. But with a management shake-up, divisional reorganization, costly nonautomotive acquisitions, and the start of the Saturn project capturing the attention of the business and automotive press, it was perhaps understandable when another new policy took hold with little notice.

In the Eighties, according to retired GM Design Staff executive Larry Faloon, corporate policy toward its advanced concept cars changed. For the past 20 years or so since, General Motors has made every effort to preserve its concept vehicles. The corporation now prefers to warehouse them for posterity and occasionally brings them out for special occasions.

Before then, General Motors long had a policy that hand-built cars, including prototypes, "mules," show cars, concept vehicles and assorted one-offs, had to be rendered unusable and scrapped, usually within a year of their completion. Such cars are rarely engineered or tested for real world driving conditions. GM reasoned that if its show cars were to fall into private hands, the corporation could be held legally liable if the vehicles were involved in accidents.

As a result, many GM show and concept cars ended up destroyed, including some that thrilled visitors to the famous Motorama exhibitions. Even so, a few did survive. The 1951 GM LeSabre and Buick XP-300, the 1953 Buick Wildcat, three 1953 Cadillac Le Mans convertibles, and two 1954 Pontiac Bonnevilles were among those spared this fate. Several other dismantled Motorama specials were secreted in a wrecking yard near the General Motors Technical Center in Warren, Michigan.

The two-seat 1954 Oldsmobile F-88 is another of the fortunate survivors that belonged to this different era. Notes Faloon, "I think that Mr. Earl," meaning Harley J. Earl, the tough-minded boss of what was then called General Motors Styling Section, "was categorically opposed to destroying Motorama cars." Earl wielded tremendous power within the corporation and did pretty much what he wanted with "his" show cars. "In those days," notes Faloon, "I guess when Mr. Earl wanted to give a show car to somebody, he just did."

The 1954 Oldsmobile F-88 left General Motors' Styling Section under mysterious circumstances. And when mystery overshadows history, as it surely does in this case, people tend to make up stories. The Oldsmobile F-88's current owner, Seattle area auto collector Gordon Apker, discovered soon after he bought the car that it came with nearly as many stories as the Empire State Building, some of them just as tall.

One tale gave the 1954 Oldsmobile F-88 an identical twin. That part is true, but the twin, says a second story, burned while being loaded for transport between shows. Or did it catch fire at the home of Oldsmobile's chief engineer? Yet another account says there might have been a third Oldsmobile F-88.

These stories are made more confusing by the fact that there actually were three distinct Oldsmobile F-88's. The first F-88 built for the 1954 Motorama show circuit was followed in 1957 by the Oldsmobile F-88 Mark II, which looked entirely different with its quad headlights and blade-like vertical tailfins. The final Oldsmobile F-88, the Mark III, was shown in the 1959 GM Motoramas, and looked nothing like the earlier two.

On the next page, find out everything you ever wanted to know about the very first Oldsmobile F-88.