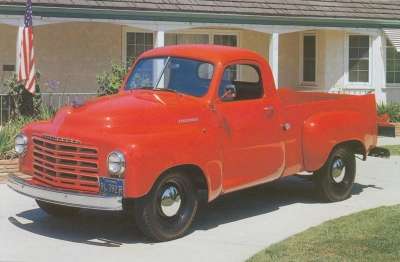 While trucks had never been known for their comfort, the 2R-series of 1949 Studebaker trucks included features that made significant strides to rectify this shortcoming. While it could still not make claims of a "boulevard ride," the new cab and chassis combination was a cut above the competition. The capacious cabs featured a 55-inch-wide "adjusto-air" bench seat covered with durable vinyl and adjustable to three positions.

Other creature comforts included vent wings, dual windshield wipers, steering-post gearshift, right and left sun visors and arm rests, a cab light that operated automatically with the door, and dual foot-controlled ventilating air scoops -- the last five of these features being unavailable on any competitive make.

The air intake vents were located on the right and left of the grille, and two tunnels channeled liberal volumes of air to the passenger compartment through outlets at knee level on the firewall. The air scoop on the left also acted as an intake for the climatizer, supplying fresh outside air to the optional heater and defroster units.

Studebaker heavily promoted the new truck in nearly every medium available in 1948. This included newspapers, magazines, radio, and direct mail. To encourage showroom traffic, it had 1/30-scale promotional models of the pickup and deluxe heavy-duty stake varieties made in white metal by National Products of Chicago.

The combination of the new Bourke design, the wide array of unique features, and the active sales campaign coupled with a very strong sellers' market made the 1949 2R5 trucks the best-selling light trucks in the company's history. As a result of this success, Studebaker decided not to mess with a good thing. It continued the R-series line through 1953 with only some rather minor running changes, such as a shift to tubular front shocks late in 1950. (Since there were no major alterations made, Studebaker arbitrarily chose a serial-number demarcation to delineate one model year from another.)