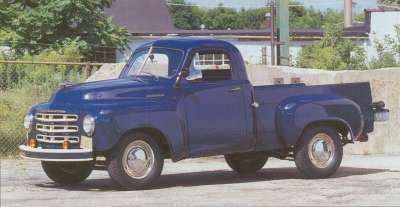 As envisioned in the studio in late 1945, the 1949 truck would have had fenders flowing into the doors. See more classic truck pictures.

On April 28, 1948, nearly 1,300 dealers, salesmen, and special guests arrived at Studebaker's recently acquired 1 million-square-foot truck assembly plant for a sneak preview of the company's new commercial car line. Not only did they get to view an impressive array of sparkling new trucks in various capacities, wheelbases, and body types, but they were also treated to a tour of the giant facility to see how trucks were made. It is safe to say everyone came away from the day's event full of optimism that the future of Studebaker's truck business would be as bright as the reputation of early Studebaker trucks.

Studebaker, of course, was a pioneer in the field of commercial transportation. Its world-famous wagons, built between 1852 and 1920, made hauling history by moving generations west during America's great migration period, and served just as admirably as workhorses for farm families and city merchants. In 1902, Studebaker unhitched the horsepower from the front of the wagons and built its first self-propelled truck energized by an awesome array of electric batteries. The company marketed its first gasoline-powered truck in 1912, the Flanders delivery car.

A year later, the Studebaker badge replaced the Flanders and, by 1917, the company had in its lineup half- and one-ton chassis with delivery, stake, express, and combination passenger and express bodies. The Great War interrupted truck production and it wasn't until 1925 that Studebaker re-entered the market with a line of buses, ambulances, and funeral cars on the Big Six chassis.

One year later, the company was the world's largest producer of buses and could claim to control 35 percent of all the ambulance and funeral car business in the United States. Early in 1928, a Studebaker-built Erskine was introduced in either a screenside or panel delivery and, shortly thereafter, similar bodies became available on the Dictator chassis.

In the early Thirties, Studebaker expanded its truck offerings to include models from half- to two-ton capacity, the most interesting of these being a half-ton model called a "boulevard delivery" on a 114-inch-wheelbase Dictator model GL chassis and the 1933 Studebaker-built Rockne humpback deluxe delivery on a 115-inch wheelbase. Studebaker continued to try to find a niche in the truck market with the novel cab-forward models introduced in 1936, and even tried selling a few diesels.

One of the most intriguing offerings during this era was the 1937 half-ton model J-5 that Studebaker called the Coupe-Express. It featured passenger-car styling, a full steel body and double-walled box, and all the passenger-car amenities. Perhaps, above all, it was arguably the most attractive pickup on the market. Moderate initial success prompted Studebaker to continue the car-based half-tonners into 1938 (K-5) and 1939 (L-5), but sales lagged as, respectively, only 1,000 and 1,200 of these latter two models were built.

In 1940, Studebaker used its new Champion as a base for creating a unique pickup coupe and sedan delivery. The former was a standard business coupe with the trunklid removed and replaced with a small pickup box; the latter, a two-door sedan with the rear seat removed and sheetmetal blanks fitted over the rear glass. 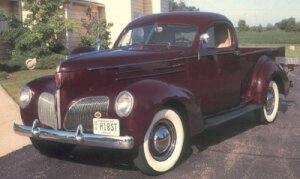 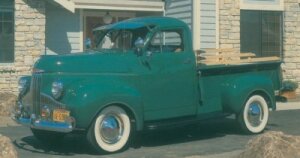