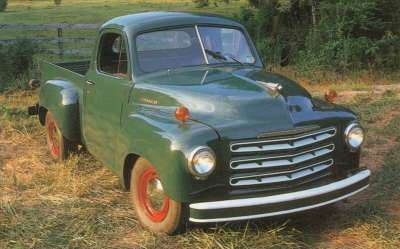 By late 1953, Studebaker realized it would have to make some changes. The 2R series line had been in production for five years and had become dated, and would be spruced up for the 1954-1955 Studebaker truck line. In addition, the market conditions had changed and sales were lagging badly. The fact is the truck division had become stagnant. Though the reasons for this are somewhat unclear, it may have been the result of president Paul Hoffman's departure, which ironically came just as the 1949 trucks were being introduced in May 1948.

Hoffman was a strong proponent of the truck division and without his support and encouragement, it quickly fell on hard times. Additionally, Studebaker was struggling in its automobile division.

A proposed model-N car, scheduled for production in 1952, was scrapped after hundreds of thousands of dollars had been spent on it, and all-new 1953s were rushed into production with near-disastrous results. Sheetmetal stampings on the coupes and hardtops could not be fit properly and by the time this was worked out in January 1953, public enthusiasm had begun to wane.

As a result of management's failures, the new 1954 truck line did not get under way until February. The half-ton pickup models were designated 3R5 for those powered by the Champion six and 3R6 for those with the 245.6-cubic-inch engine.

The two most visible design changes were the one-piece curved windshield and the restyled ivory-colored grille featuring four horizontal openings. Headlights were set into the grille with small parking lights positioned below. An oval "Studebaker" nameplate was placed at the back edge of the hood on both sides. Bumpers and wheels were painted ivory, and unadorned moon-shaped chrome hub caps, borrowed from the 1950 Commander passenger car, were used.

The instrument panel was all new and featured round gauges. Strangely, some items standard on the earlier 2R series were extra-cost options on the 3R. These included the right-hand sun visor and arm rest, and the door-activated dome light. No significant changes were made in the mechanical components of the truck. Because of the short eight-month production run and general decline in business, sales of the 3R5 and 3R6 dipped to 2,700 and 1,620, respectively, making these among the rarest postwar Studebaker trucks.

The new 1954 Studebaker trucks, dubbed the 3R, had a single-pane windshield and other changes.

The biggest news for the 1955 models was the introduction of the Studebaker "Econ-O-Miser" V-8 in the half-ton line. This 224-cubic-inch overhead engine had been first used in the 1951 Commander and had proven quite reliable. With the standard two-barrel carburetor, it was rated at 140 horsepower; with the optional four-barrel ($18), power jumped to 160 horsepower. The eight-cylinder trucks, designated as model E7, were available with the optional automatic transmission for an additional $219. The E7 also had dual electric wipers, a pushbutton starter (with automatic transmission), and a three-spoke dished steering wheel.

The old Champion six got a boost in power by virtue of a 3/8-inch increase in stroke, which raised horsepower from 85 to 92 in what were now known as E5 models. The Commander engine was still available as an E6 model, though most were sent overseas. The standard rear axle ratio for all half-tons was changed to 4.27:1, with 4.09 and 4.55 gears optional.