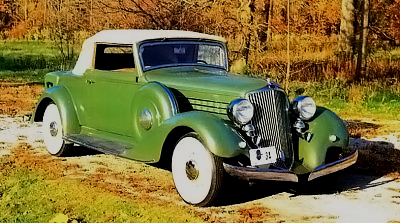 The 1934 Graham Blue Streak Model 67 convertible was a 2/4-passenger model, although the second two had to sit back in the rumble seat.
©2007 Publications International, Ltd.

While former Graham research engineer George Delaney remembered some early bugs with the supercharged Graham Blue Streak involving gasoline being pushed into the crankcase and crankcase oil being drawn into the combustion chamber, these defects were remedied before volume production began.

The Grahams dispatched the 51-year-old Cannon Ball Baker to give the supercharger the severest test he could devise, a cross-country run of 53 hours, 30 minutes. The car passed. In fact, as of 1975, Cannon Ball Baker’s run in that supercharged Graham still stood as the official record for a one-man transcontinental crossing!

As it turned out, Graham blowers proved to be extremely reliable and trouble-free; some went 100,000 miles or more without breakdown. And the increased power and acceleration were not attained at the expense of fuel economy, which was upped 7 to 15 percent, depending on speed.

When supercharging principles were applied to Graham six-cylinder engines after 1935, the blown Grahams were the overall winners in the Gilmore-Yosemite Economy Run three years running: 1936, 1937, and 1938.

In the June 12,1934, issue of the British magazine Motor, the savvy testers across the pond were quite impressed with the new Graham, “a car which upsets many preconceived ideas and prejudices with regard to supercharging. Although it possesses a performance worthy of a costly sports model, it is extremely quiet, smooth and flexible, starts very readily from cold, and yet is not unduly heavy on petrol.”

The car accelerated from 0 to 50 mph in 13 seconds and achieved a timed speed of 93 mph at the Brooklands racetrack. “Despite the high speed,” Motor went on, “the supercharger is ordinarily inaudible and produces only a slight whine when the car is travelling fast.”

According to a justifiably proud Joe Graham, “The development of the Graham straight eight engine with supercharger represents the most important single advance in automotive engine progress in a decade.” (Take that, Ford V-8 fans!)

At a dealer meeting in Philadelphia on January on 16,1934, Graham announced that the supercharger would also be fitted to the company’s six-cylinder engine, raising horsepower from 85 to 125. This announcement was premature -- Graham’s first supercharged six didn’t arrive until 21 months later.

Instead, by May 1934, the lower-priced supercharged Special Eight was added, at about $200 less than the Custom, to place the benefits of supercharging within the reach of additional buyers.

With all this focus on the engine, the 1934 and 1935 Graham Blue Streaks received minimal styling changes. Find out what did evolve on the next page.