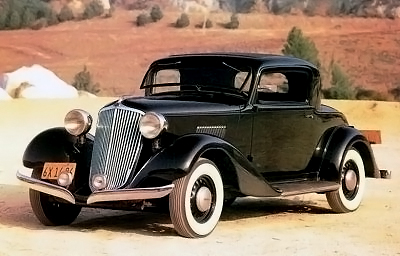 Introduced on the second-series 1934 Graham Blue Streak Custom Eight (Model 69) and shown initially to the public at the New York Automobile Show on Saturday January 6, 1934, the blown Graham was the first popular-priced American car to offer a supercharger -- a feature formerly found only on exotic racing cars and seldom-seen Duesenbergs and air-cooled V-12 Franklins.

Now the curious could sample and purchase a supercharged car at more than 920 Graham dealers -- and for only $1,245 for a business coupe and $1,295 for a 2/4-passenger coupe.

The Graham's blower, unabashedly based on the Duesenberg unit, was designed by F.F. Kishline, the company's capable assistant chief engineer who would succeed Lou Thoms as chief engineer in August 1935.

Following Graham's exit from car making, Kishline went on to a successful career at Nash. He was a close friend of Fred Schwitzer of Schwitzer-Cummins, who purportedly obtained a set of drawings of the Duesey unit for Kishline's perusal.

The Graham unit was a centrifugal-type, mounted at the right side of the engine between the single-barrel down-draft Stromberg carburetor and the intake manifold, and driven through rubber-bushed double universal couplings to a Cone-type worm-and-wheel gearing. Both the rotor and worm-wheel shafts were mounted on plain bearings; excessively complicated bearing mountings and adjustments were deliberately avoided.

The 7 1/2-inch rotor, made of a special high-tensile aluminum alloy and spinning horizontally on its balanced shaft (tested to run smoothly at any engine velocity) revolved at 5.75 times engine speed, or 23,000 rpm at the horsepower-peak speed of 4,000 rpm.

The result was that power increased 42 percent -- from 95 to 135 horsepower -- although the engine size was increased but eight percent to 265.4 cubic inches, due to a 1/8-inch larger bore.

A similar amount was added to the valve diameters to increase the engine's breathing capacity, and a redesigned aluminum cylinder head boosted the compression ratio to 6.7:1. Graham claimed to have the highest compression ratio of any stock car using ordinary fuel.

Although the car's top speed was raised 10 mph, to 90-plus mph, the supercharger was designed to boost power and acceleration mainly in the mid-ranges, where torque peaked at 210 pounds/feet at 2,400 rpm at about 45 mph.

Faster acceleration was offered not for standing starts, but rather for use between 50 and 60 mph, when a driver faced the awkward and sometimes hazardous dilemma of overtaking other cars on two-lane roads in heavy traffic.

A "dual phase" throttle was employed to inform the driver when the engine was operating above normal output levels, although the supercharger was in operation at all engine speeds.

Starting while cold was facilitated by both the better mixture distribution and the more energetic agitation of the fuel mixture, which was warmed by circulating engine coolant through the upper supercharger housing.

Continue to the next page for more details about the supercharged Graham Blue Streak, as well as the public's reaction.