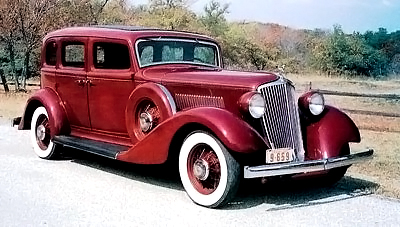 The Graham Blue Streak, with its stiffer frame, outboard springs, and wider track, was a car with exceptional stability, superior handling, and greatly increased road-holding characteristics. But as former Graham research engineer George Delaney confided, the Graham Blue Streak's performance and popularity proved to be a problem (at least for the sales force).

Early Blue Streaks, placed in the hands of overeager district sales managers, too often went sliding off the road. With body roll dramatically decreased compared with previous Grahams, the inexperienced drivers had less warning about when the back end was about to break loose, and tended to push the cars beyond their expanded -- but still finite -- limits.

Apparently Graham Blue Streak owners were more cautious, as there is no record of actual purchasers getting themselves into similar trouble.

Powering the Graham Blue Streak was a 90-horsepower, 245.4-cubic-inch straight eight, with 3 1/8 × 4-inch bore and stroke. Although similar to the engine used in Graham's 1931 Special 820, it boasted some important improvements, including new cam contours, dual valve springs, aluminum cylinder head, and resonant-type muffler.

Replacing the former widely advertised four-speed transmission was a Warner-Gear three-speed, silent-second unit with free-wheeling. The shock absorbers were adjustable from the driver's seat. Also new were "Centrifuse" brake drums in which molten cast iron was spun into the stamped-and-welded brake drum ring and backing plate, providing longer life with lighter weight.

During the spring selling season, Graham joined DeSoto in offering low-pressure (22 psi) 7.50-15 "dirigible" balloon tires as an option. The Firestone or U.S. Royal tires were mounted on special small-diameter spokeless wheels, covered by large chromium discs. They were installed on about one-fifth of the Graham Blue Streak Eights.

The Grahams weren't shy about putting the performance of their new baby to the test. Driving literally and aptly "like a blue streak," the venerable Cannon Ball Baker roared up New Hampshire's formidable Mt. Washington in a record 13 minutes, 26 seconds at the wheel of a stripped Graham Blue Streak convertible.

And at the Indianapolis 500, a Graham-powered entry, mounted over a banjo frame, qualified at 109 miles per hour but was forced out of the actual race on the 61st lap with a broken crankshaft. Another Graham later entered the 1934 Indy 500 and finished tenth at an average speed of 95.9 mph.

The Graham Blue Streaks were sensations all around, so much so that 4.2 million in 21 different styles were eventually produced. Unfortunately for the company, those millions were model cars, patterned after the Graham Blue Streak and produced by Tootsietoy.

There was also a much larger sheetmetal model made by Kor-Kor, produced with and without headlights, which is much in demand at toy shows. In fact, a special display of Kor-Kor and Tootsietoy models was dispatched by Graham to dealerships across the country, the Kor-Kors being used to display the Blue Streak's multifarious colors.

With the Depression in full swing, the full-size Graham Blue Streak models were not as popular as the miniature Tootsietoys. Alhough the Blue Streak was widely admired by the public and competitors alike, Graham car production slid to just 12,967 in calendar-year 1932 -- mostly Blue Streak Eights, although there was also the Model 56 with conventional styling.

The company did, however, have the satisfaction of producing the only 1932 eight-cylinder car to show a sales gain over 1931; in fact, its 12-month sales of Blue Streak Eights doubled.

Against the styling and engineering triumphs of the Graham Blue Streak was set the overwhelming tragedy of the sudden death of Ray Graham at age 45. The successful triumvirate was forever broken, but the remaining two Graham brothers soldiered on.

Continue to the next page to learn more about the 1933 Graham Blue Streak.