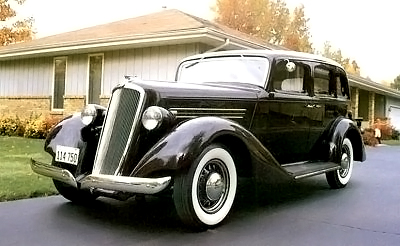 The Graham Blue Streak made a final curtain call in January 1935 when the second-series Special Six, Eight, and Supercharged Eight debuted (Models 73, 72, and 75).

Radiator grilles were higher and narrower, hood side louvers were again altered, and other minor exterior and interior changes were made. The truth was that Graham had clung to the Blue Streak body design one year too long; most other 1935 cars looked newer.

While the coupe and convertible 1935 Graham Blue Streak bodies were carryovers, the sedans received a new sloped roof and rear quarters with a true built-in trunk, access to which was provided by a hinged lid. Unfortunately, this early attempt at a concealed, in-the-body trunk was awkwardly handled, giving the sedans an uncomfortable, over-cabbed look.

In print, the 1935 Supercharged Eight was rated at 140 horsepower, five more than before. The increase allegedly came from the addition of a new dual-downdraft Stromberg carburetor in conjunction with a new four-arm aluminum intake manifold connecting each intake port directly to the blower outlet.

But again, according to Graham Blue Streak specialist Bill McCall, these changes never saw the assembly line, as existing Model 75s all have the single-barrel carb and cast-iron manifold in common with the Model 69.

Shortly after the model year began, a 1 1/2-foot “SUPER-CHARGED” nameplate was added to the sides of the hood to impress fellow travelers at traffic lights.

Although it looked like a Blue Streak, it really wasn’t. Underneath, there was no banjo frame, although outboard springs were featured.

Model-year production increased to approximately 18,466 cars, mostly Standard Sixes. The sales improvement, coupled with a severe decline in sales of Graham’s eight-cylinder models, put the company on a new course.

During 1934 and 1935, reports and rumors hinted at a potential merger between Auburn, Fierce-Arrow, Reo, Hupp, and Graham -- surely an unlikely, unwieldy, and unworkable coalition. At one point, Reo asked if either Hupp or Graham would be interested in furnishing engine parts in return for body designs and dies. Hupp demurred, but the Grahams evinced interest.

On July 15, 1935, Robert Graham traveled to Lansing, Michigan, to propose to the Reo board that Graham and Reo form a new joint sales company to market Reo and Graham products, even suggesting the organization of a new body company to build commercial vehicles.

Robert Graham’s vision of a Reo-Graham alliance could have been beneficial to both firms. Here would have been the chance for the Grahams to re-enter the truck business. But the wary Reo board, still scarred from a battle for control in 1933 and 1934, listened politely to Robert Graham’s ideas -- and said, “No thanks.”

Ultimately, Reo did agree to Graham’s use of the Hayes-built 1935 and 1936 Flying Cloud bodies for the 1936 and 1937 Graham Cavaliers and Superchargers, which then looked like everyone else’s cars.

Graham would return to high style with the “sharknose” cars of 1938 to 1940 and the Cord-bodied Hollywoods for 1940 and 1941. But it was the Graham Blue Streak and its later supercharger that really proved that the Graham brothers -- in cars as well as in trucks and glass-making -- could still run with the big boys. Give their beautiful, innovative 1932 through 1935 Graham Blue Streaks the Blue Ribbon!