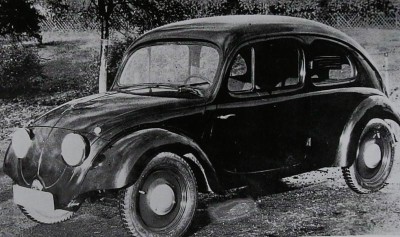 After being courted by Adolf Hitler to design a small affordable car for the masses, Porsche produced the Volkswagen V3 concept in 1935.
2007 Publications International, Ltd

Development of the 1934-1936 Volkswagen Beetle prototypes centered on Adolf Hitler's specific requirements for the "people's car."

In the early 1930s, Germany's new Führer was touting a national superhighway system -- the Autobahnen -- and the need for affordable cars to traverse them. A politically connected Mercedes-Benz executive, Jakob Werlin, arranged for Porsche to meet with Adolf Hitler in 1934.

First, though, Porsche sent a memo (dated January 17) detailing points with which Hitler was likely to agree. The Volkswagen would be durable and space-efficient; it would cruise at its maximum speed of 100 kilometers per hour (62 mph) and average about 40 miles per gallon of gas; it would easily climb hills; it should have an easily repairable air-cooled engine (service stations were sparse, and German winters can be harsh); it must be large enough for two adults and three children (the ideal Nazi family) plus their luggage; and its platform must be adaptable to a variety of uses. Chillingly, the last included military applications.

Hitler was no less a "car nut" than Porsche, and he was all smiles when the two met in May. Then he dropped a bombshell: Any Volkswagen must sell for no more than 1000 Reichsmarks -- only about $360.

Yet even Hitler realized that was faintly absurd, so he ordered the Reichsverband der Deutsche Automobilindustrie (RDA, German Automobile Manufacturers Association) to assist with developing the Type 60, an evolution of the Type 32 recently begun at Porsche Konstruktionsburo.

With a grudgingly small RDA grant, the Porsche team went to work on the 98.5-inch-wheelbase design. This produced two, largely hand-built prototypes by 1935: a sedan called V1 ("V" for Versuch, or "experimental") and a V2 convertible (party planning called for both body styles).

Further refinement produced a trio of V3 models later in the year. Hitler liked these so much that at the 1935 Berlin Motor Show he ordered the V3 be prepared for production. But when RDA members complained loudly about the sub-RM1000 price -- a genuine threat to their business -- a piqued Hitler made the project a wholly state-run enterprise of the Deutsche Arbeitsfront (DAF), the national labor union.

The motto of one DAF department was Kraft durch Freude, or "Strength through Joy," and it prompted the official name KdF-Wagen, though the car was still widely referred to as the Volkswagen and even Beetle.

The lack of a rear window is evident in this drawing for the 1935 ­Volkswagen V3 concept.
2007 Publications International, Ltd