Did the Nazis invent the Volkswagen Beetle? 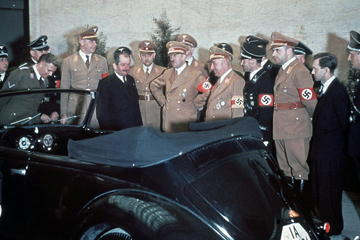 The Volkswagen Beetle, the best-selling car of all time, wasn't always so beloved. The car wasn't truly invented by the Nazis, in the sense that they didn't design it or build it, but that's just a matter of semantics. The Beetle was indeed the result of Adolf Hitler's plan to build a reliable car that hard-working German families could afford. He met with car designer Ferdinand Porsche in 1935 to set his plan into motion. The car had to seat five occupants, be easy to maintain, capable of traveling quickly on the autobahn and be affordable on an average salary.

It took a while for the simple, air-cooled, rear-engined car to catch on in other parts of the world. The Brits thought it was noisy and hideous. Americans were hesitant to support anything even remotely connected to Hitler or the Nazi party. A rival car company claimed that elements of Porsche's design copied some of their own, a case which VW settled a couple decades later. It was revealed even later that Hitler stole many elements of his 1935 design from an earlier vehicle that was designed and driven by an inventor and journalist named Josef Ganz. Hitler spotted Ganz's car at a show in 1933, and the key elements of its design ended up in the Volkswagen. Ganz even called his car the May Bug. Shortly after Hitler and Porsche hashed out their plan, Ganz, who was Jewish, closed his business and fled to Switzerland.

But the general public, those who knew nothing of the copyright and design issues while the Volkswagen Beetle was in production, were really only concerned with the car's connection to Hitler, the Nazis and the lasting effects of World War II. Eventually, though, people across the globe gradually agreed that the Beetle was based on a solid premise, and it was okay to accept "The People's Car" and still be opposed to Hitler and his followers. The Nazis never actually produced or sold the car themselves, so that helped. In the 1960s, after a clever marketing campaign, the VW Beetle became the best-selling imported car in America. And in the meantime, Volkswagen expanded its product lineup to include variants such as military vehicles, the soon-to-be-iconic VW Bus, the playful and rambunctious Dune Buggy, and the svelte, Porsche-like Karmann Ghia coupe and convertible. The last traditional air-cooled VW Beetle rolled off the production line in Mexico in 2003, and although the car's unfortunate historic roots haven't been forgotten, it's clear that most of the world isn't holding a grudge against the car itself.