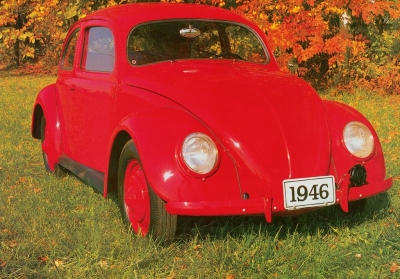 Very few 1946 Volkswagens were built, and even fewer ended up in America. See more classic car pictures.
none

Although a prototype was created before World War II, the design that would become the 1946 Volkswagen Sedan was put on hold until after the war.

Much of Germany's industrial base was either destroyed or severely damaged by Allied bombs during World War II. Included in this was the factory that had been built in Wolfsburg just before the war to produce the KdF Wagen (Kraft durch Freude-Strength through Joy), Hitler's vision of a car for the masses.

The car itself was ready by 1938, although work had begun in 1934 when the Nazis commissioned Ferdinand Porsche to design a small, economical, and inexpensive people's car. Three prototypes were ready in 1936, and a further 30 were built in 1937.

The VW38 of 1938 was the final version, but there were no cars available to the public because Hitler needed war material. Instead, the factory turned out the Jeep-style Kübelwagen and a four-wheel-drive amphibious vehicle, both of which acquitted themselves well during the war.

The Volkswagen plant came under British control after the fighting ended, and it was thought at first that the firm might be taken over by a British (or even American) automaker, but there were no takers for what looked to be a sure loser. In spite of many obstacles, VW somehow got started by at first assembling cars from parts on hand.

Only 1,785 cars were built in 1945, but this improved to 10,020 units for 1946, most of them earmarked for the British army. But Volkswagen had gotten underway, however modestly, and just 15 years later would build its five-millionth car.

But in 1946, VW Beetles were hard to come by and thus not a terribly common sight even in Germany. The featured car was purchased there by a U.S. serviceman who brought it home with him. A later owner, William S. Henry of Akron, Ohio, came into possession of the car when his father, a VW dealer, acquired the 1946 as a trade-in for a new Beetle.

The speedometer is registered in kilometers, as this car was built for the European market.
none

This car runs with VW's famed flat four, an air-cooled 1,131-cubic-centimeter unit that was noted for its light weight, rear-mounted location, aluminum/

magnesium construction, and durability. It developed a modest (too modest, really) 25 horsepower.

Unlike Beetles built starting in 1953, it has a split rear window, a feature now treasured by collectors, as are the pop-up turn signals in the B-pillars. Other items setting the 1946 apart from later Beetles are the almost total lack of chrome, the neat tool kit, a speedometer that's marked in kilometers, and the open glovebox.

What is familiar, of course, is the Beetle's world-famous design, which VW wisely left basically untouched for decades.

The split rear window is a feature treasured by collectors.
none

In about 1960, VW of North America sponsored a contest to find the oldest VW in the U.S. Henry's father entered his car into the competition, but came in second to another 1946 model that had found its way into the U.S.

VW acquired the winning car by giving its owner a brand-new Beetle in trade, leaving the Henrys' car the oldest VW in America in private hands. It was restored in 1988-1989 by Shade Tree Motorcars, so that when it's shown everyone can enjoy this bit of VW history.