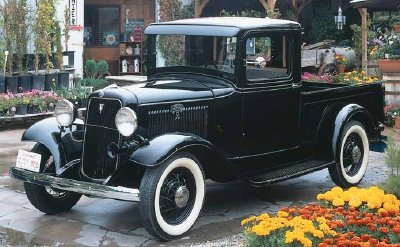 Due to low demand, 1934 was the last year not only for the four-cylinder engine, but also for open-cab Ford trucks. Since both of these represented the least-expensive alternatives, it was a subtle signal that the economy was finally beginning to improve.

Ford trucks didn't share the car line's sleek 1933 styling alterations, but did get a thicker grille housing and lower headlight bar, as shown on this little-changed '34 pickup.

Ford's V-8 had grown so popular that the four-cylinder engine was fazed out during the model year, as was the roadsterlike Open Cab body for trucks.

Carrying its original oak Stake Bed is a V-8-powered 1934 Model BB on the standard 1311/2-inch-wheelbase chassis.