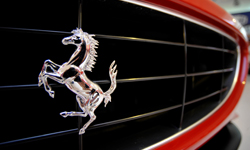 One of several Ferraris to make it onto this list (the Italians are good at what they do), this was the car featured in the movie "Ferris Bueller's Day Off" -- the one that Ferris and his friend Cameron completely destroyed after taking a joyride into downtown Chicago.

To call the Spyder gorgeous is an incredible understatement. It's the classic embodiment of the sports car -- long hood, two seats and a drop top. The SWB California Spyder was a variant on the popular Ferrari 250 designed for the American market. It featured a 3.0-liter SOHC V-12 with 280 horsepower and a four-speed manual transmission [source: Motor Trend].

Actor James Coburn owned this particular Spyder for more than 20 years. At an RM Auction in 2008, British TV and radio presenter Chris Evans bought it for $10.9 million. It was a record auction sale that stood only until the next (and final) car on our list broke it the following year.