by Patrick E. George
Prev NEXT
4 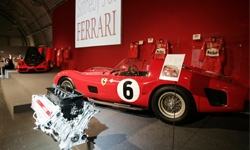 This 1962 Ferrari 330 TRI is part of a collection of dream cars and memorabilia to be sold at the legendary home of Ferrari in Maranello, Italy.
AP Photo/Luca Bruno

The last two letters in this Ferrari's name are LM, which stand for Le Mans, as in The 24 hours of Le Mans. The day-long race is the world's oldest endurance race and one of the most difficult in motorsports. It's also a race to which Ferrari is no stranger.