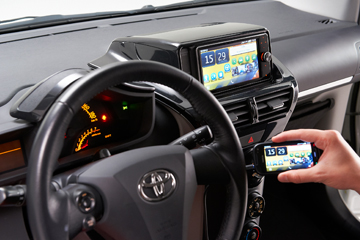 Once everything is all hooked up, you can use the buttons in the center console and even the buttons on the steering wheel to control your phone.
Courtesy of Toyota Motor Europe

Right off the top, let's start with some things that MirrorLink is NOT:

So what is it then? MirrorLink is:

If you've ever cursed your car for not doing all the cool stuff your phone can do, MirrorLink will save your poor car's feelings from your terrible wrath. It will not, however, allow you to drive your Android to the store for the milk you forgot to pick up on your way home. Maybe next time, MirrorLink. Maybe next time.

So what can MirrorLink do?

Putting the "Mirror" in MirrorLink ... and the "Link"

From a user's standpoint, MirrorLink is pretty slick. You get into your car with your smartphone, which you do all the time anyway, then plug the phone into the infotainment system with a USB cable, which you also likely have already. MirrorLink is the magic that makes the phone's computer and the car's computer talk to each other.

Once everything is all hooked up, you can use the buttons in the center console and even the buttons on the steering wheel to control your phone. And -- And! Your car charges the phone while it's plugged in. Your texts will be read to you, and your all-ABBA playlist on Spotify is ready to rock. Or whatever it is that ABBA does.

There are a couple of sticking points. One is the infotainment center. Lots of cars have them installed at the factory; many more do not. If you're dying to hook your stuff up using MirrorLink, only a few receivers work, and those will only fit newish cars. (For the car-audio nerds in the house, you need DIN 7x2 or double DIN 7x4.)

Though MirrorLink is a mere toddler on the tech scene, Alpine, Sony and JVC already make in-car devices that use the protocol, and Nokia and Samsung Galaxy SIII phones will work with it, too. More than 80 percent of automakers and 70 percent of smartphone vendors (as of press time) have been approved by MirrorLink, so it's only a matter of time before your car and your phone are talking behind your back.

Once you've got the smartphone and the proper receiver, there's still one more caveat: Only approved apps can be used. And that doesn't mean those approved by you -- so no Fruit Ninja games or "Gangnam Style" videos on YouTube while the wheels are rolling. Only apps tested and approved by the CCC -- the group that invented MirrorLink, remember -- will work with the in-car interface and all the controls. But the good folks at the CCC expect to see "spoken-word news feeds, voice-activated social media status updates, GPS-enabled automated location check-ins and more -- the sky is the limit."

All this testing is rigorous, but it doesn't take long. A device can be approved in under a week, and an app in "a couple weeks," the CCC said. 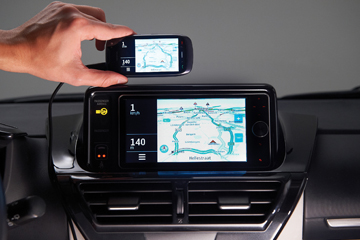 MirrorLink features universal plug-n-play, which means that when you plug a device in, it just works. We like that!
Courtesy of Toyota Motor Europe

Though it works pretty seamlessly in the cockpit of the car, there's a lot of tech wizardry going on behind the scenes. First, the CCC baked in Internet protocols that work with almost every device in the known universe.

Second, there's a lot of technology already in modern cars that the CCC could take advantage of in MirrorLink. BlueTooth, for example, has been available for hands-free in-car calls since 2001. Cars have had USB ports, mostly for music players, for nearly as long. More recently, cars are being equipped with WiFi, and MirrorLink will soon use that rather than the cable to connect phones and cars. MirrorLink merely takes advantage of all this technology to weave its protocol into the car you've already got, or the next car you buy.

MirrorLink also brings some new technology to the driver's seat, like universal plug-n-play, which means that when you plug a device in, it just works without a lot of folderol and downloads and drivers and ritual sacrifices.

It also brings virtual network computing to the car, which you may already be familiar with if the trolls in the IT department have ever taken over your computer rather than trudging up two flights of stairs to deal with your "problem." It's the mirror in MirrorLink, the thing that brings your phone's screen up on the car's screen and tells your phone which buttons you pushed in the car. Lastly, in addition to BlueTooth, MirrorLink can stream music using real-time protocol.

All of this, we hope, adds up to safer driving. "The technology conforms smartphone controls to the same Auto Alliance guidelines for driver distraction that govern how other in-vehicle buttons, switches and knobs function," the CCC said in an e-mail interview. "By allowing a driver to completely put away a smartphone while driving and making that phone controllable via the steering wheel and dashboard buttons and screens, the CCC creates a more responsible driving environment."

While the current MirrorLink mission is to limit driver distraction, the CCC said there are "some intriguing use cases when it comes to carrying the applications on your phone to other, larger displays so stay tuned for updates!" Life-sized Plants vs. Zombies on a big-screen TV? Fingers crossed!

One of the biggest challenges for a car reviewer these days is to differentiate all the vehicles we drive in a year. They're all pretty great anymore, and they're built to last more than cars ever were before. The scale pretty much goes from "good" to "great."

In-car electronics, though, are easy to compare, and they make a huge difference to consumers and journalists. The tricky part is knowing who the target audience for a car might be. Putting something like MirrorLink in a car your grandparents are going to buy will terrify them. Putting it in a car I might want to buy is a terrific idea. I love LCD screens. The more my car interior looks like the USS Enterprise, the happier I am.

There are in-dash displays that grow leaves, and LCD screens in the center console as big as the TV my family had when I was a tiny tot. The danger is in the distraction, but once we get those self-piloting cars online, we'll be golden. Welcome to the 21st century. It is awesome.