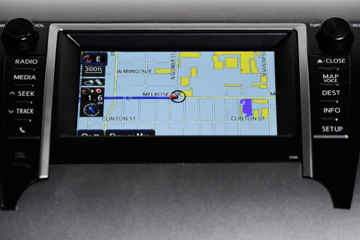 Several decades from now, when automotive historians take a look back at the first 20 or so years of the 21st century, they may recognize the period as the "Telematics Era," or perhaps the "Infotainment Age."

We've witnessed a surge in gadgets designed to keep us informed and entertained while on the move -- initially from the automotive aftermarket. Now the car companies themselves want in on the action, and they're providing more and more complex, digitally connected gizmos as factory equipment.

Toyota, one of the world's largest automakers, is placing its marker with a system it calls Entune. Using a driver's cellular phone as a data carrier, Entune connects with a host of concierge-like services from inside an Entune-equipped Toyota vehicle.

Japan-based Toyota certainly isn't the first to enter this field. Telematics systems, a broad term that describes on-board electronics used to communicate data about safety, vehicle location, vehicle condition and more, have been around for several years. Perhaps the most recognized of these systems is GM's OnStar service. More recently, Ford Motor Company has been gaining traction with its SYNC service, which provides information, entertainment and all-around digital connectivity in concert with a driver's cell phone.

In this article, we'll focus on the Entune system, taking a look at its features, the technologies that power it and how it's used.

Curious to know what you'll find on an Entune-equipped car? Read the next page to find out.

Bing: The Microsoft-backed search engine is tuned to work with Entune as a point of interest (POI, in industry lingo) finder. When the vehicle is parked, a touch-screen keypad lets you type in search terms -- if you don't know the name of a specific place, you can enter a generic term, like "food," and Bing will retrieve the names of restaurants, delis, even grocery stores, along with their locations and directions if you need them. A natural voice recognition feature kicks in for you to give voice commands if you're driving.

iHeart Radio: This service gives you access to more than 700 local radio stations that are part of Clear Channel's network across the country -- no matter what city you're in.

MovieTickets.com: Ever gone out and only had a vague idea of what you and your date wanted to do -- maybe a movie, but not sure which one and where? Now your poor planning doesn't have to provide ammunition for dirty looks or a scolding -- you can see what's playing, and where, on the fly, with this service. It's even possible to buy the tickets from your car, for participating theaters.

OpenTable: Similar to the MovieTickets.com app (above), but applies to lunch and dinner reservations instead.

Pandora: In case you've just woken up from a lengthy cryogenic slumber, Pandora is the algorithm-based online music service that tailors playlists based on other songs you like -- you listen to it at your PC. With Entune, you can get it in the car as well.

Data services: So far, these services include gas station price comparisons (and directions); current stock prices; sports scores (with the ability to specifically track your favorite teams); traffic incidents (so you know what routes to avoid), and weather, including extended forecasts, current temperatures and radar maps.

Naturally, there's a CD player; but you can also get it with a DVD player (set to play only in "Park"), Sirius XM satellite radio and the completely digital HD Radio.

As high-tech as the Entune unit is, the real technological heavy lifting is done by other devices. But don't worry about additional hardware purchases -- in fact, you probably already own exactly what you'll need. 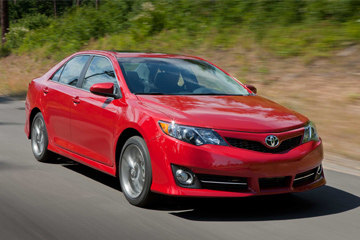 The Toyota Entune system will be available for purchase on several 2012 Toyota models, including the popular Camry.
Courtesy of Toyota

Entune relies heavily on wireless technology to do its thing. Using your cell phone (and your carrier's monthly data plan allotment) as a data conduit, Entune is able to communicate with the remote servers that process your requests and feed them back as information on the car's navigation screen.

Providing the link between your phone and the Entune system installed in the car is a familiar system -- Bluetooth. If, however, you find the process of synching Bluetooth devices too troublesome, Entune can also pair up with your phone using a plain old USB cable.

Toyota engineers anticipated that the number and variety of applications would eventually grow. Likewise, there might be map updates, bug fixes or other reasons Toyota or an Entune user wants to bring an older system up to date. Unlike a recall or technical service bulletin, you won't have to bring an Entune-equipped car to a shop to update the system. That's because the updates will happen over-the-air, automatically.

When you make a request of Entune, like asking about traffic jams along your route or getting a comparison of area gas prices, the system uses your phone's data link to send the query. A timer symbol appears while you wait -- sometimes several seconds -- for the answer.

Powered by Microsoft's Bing search engine, Entune is said to have more than 16 million points of interest that one can look up.

As it does use the cell phone network to send information back and forth between Entune servers and customer's in-car units, the system is vulnerable to coverage issues. Presumably, tunnels, mountainous areas and anywhere else that cell phone reception is spotty could make the system sluggish or unresponsive.

Toyota officially introduced Entune at the annual Consumer Electronics Show in January 2011, making it available for purchase on 2012 model year vehicles including the Prius V Three (pronounced "vee," not Roman numeral "five"), the Tacoma pickup and the popular Camry.

"The head unit price will vary depending on the model, as it will sometimes be packaged with other options," says Greg Thome, manager of Toyota Division Communications. The first three years of Entune service are free, but after that, Toyota says an access charge will apply. "Some models will have an Entune-capable [Display Audio] head unit standard, like the Prius V Three model," Thome says.

Using Entune isn't all that complicated: You simply download the Entune application from an "apps" store such as iTunes, Android Market or Blackberry Appworld to your phone.

As of October 2011, phone compatibility was still dicey: We tried entering a few not-as-popular phones on the Entune Web site compatibility checker and got the message, "Sorry, your phone and vehicle combination has not been tested."

Thome explained that Windows Mobile phones, for instance, do not have the flavor of Bluetooth needed (called SPP) to support Entune -- but if that ever changes Toyota would cater to them with Entune as well.

Once the app is on your compatible phone, you synchronize your phone with the Entune head unit, either by establishing a Bluetooth wireless connection between the two or by connecting them with a USB cable.

From there, it's simply a matter of pressing the hard "APPS" or "MAP" button on the dash to bring up an on-screen menu of your options. With distracted driving a real and prevalent problem on the roads, many initial observers have questioned the wisdom of shoving even more data at drivers in the form of telematics devices like Entune. Toyota's answer has been to use voice-recognition software, selectable from a button on the steering wheel, so that drivers don't have to take their hands off the wheel or their eyes off the road -- as much.

Overall, the controls and commands appear to be pretty intuitive. But, if you are the instruction manual reading type (or just curious), you can find complete directions on the Toyota Entune Web site.

So, will people actually buy telematics systems such as Entune in significant numbers? If the adoption curve is anything like those for in-car navigation and DVD players, it's probably safe to say they will become more affordable and more commonplace before long.

For more information on the Entune system and other automotive technology topics, follow the links on the next page.

Can a car really be death-proof?
How Tires and Wheels Work
How Axle Spring Seats Work