Can you stream online music to your car? 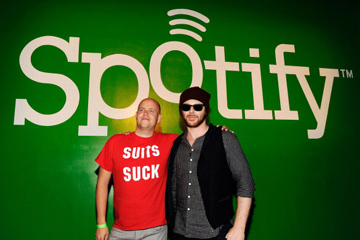 On average, Americans spend 20 hours each week listening to music and only three of those hours are spent listening to music we actually own [source: Frere-Jones]. The majority of the music we listen to is streamed from the Internet and stored on our computers or smartphones. There are plenty of online streaming options to choose from like MOG, Rhapsody, Pandora and Spotify, but is there a way we can access all of this great online music in our cars and trucks?

The short answer: most definitely! Streaming online music to your car requires the combined effort of two technologies -- the good news is that those two technologies are ones that a large number of consumers are already familiar with. Smartphone and Bluetooth wireless technology have made it possible to stream your favorite Internet music stations to your car's radio. The only problem is that, right now, only a handful of car companies have radios that can receive the Bluetooth signal.

Automakers have seen the demand for smartphone integration and many are adding Bluetooth-enabled radios to allow for streaming online music. Manufacturers like Mini, Ford, Scion, BMW and Mercedes-Benz all have models that incorporate Pandora music streaming. And as of 2012, all of Scion's vehicles will have the option of having a Pandora-enabled radio in the car [source: Pandora]. Many others, like Hyundai, Toyota, Buick, GMC and Chevrolet are incorporating online music streaming into future vehicles as well [source: Booton].

At a fall 2011 technology conference, Ford and Spotify got together and hacked the Ford SYNC system to, not only allow Spotify to stream music to the car, but to also take advantage of Ford's voice recognition technology. They were able to change songs on Spotify using voice commands [source: Kovach]. Although Ford and Spotify don't currently have an official way to integrate the two systems, their hack showed the capabilities of online music streaming to a car.

And if you're looking to stream online music in your car, but you don't have the latest model on the road, there's no need to fret. Some aftermarket companies are already selling radios with built-in Bluetooth technology for just that reason.

With all the mobile music apps available and the ease of streaming audio wirelessly through Bluetooth, you may never have to sit in traffic and listen to a song you don't like ever again.

For more information about streaming online music to your car and other related topics, follow the links on the next page.