How can you find the cheapest gas while driving? 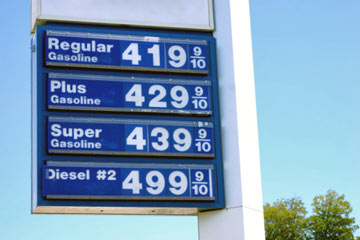 Filling up the tank still hurts, especially while you're actually on the road and prices top out above $4 a gallon. There's got to be a better way.
Hemera/Thinkstock

Mike Johnson is "frustrated." Matthew Hiner is outraged. And Blake Kezar, well, he bought a scooter because "it's so crazy." Why is everyone seething? As gasoline prices drop across the country, they are rising in Idaho, and that has everyone from Johnson to Kezar a bit peeved. Between August and September 2011, Gem State residents were paying on average 21 cents more per gallon than the national average [source: Evans].

Everyone knows that gas prices go up and down like the Boston Red Sox in September. A war in the Middle East; the lack of confidence in the stock market; seasonal demand; an oil spill in the Gulf of Mexico -- they all affect the cost of crude oil. As a result, the price of gasoline increases. It's economics 101. But why do gas prices fluctuate wildly from state to state, and region to region? And equally frustrating, why are gas prices so different in the same community?

The price at the pump is chiefly affected by crude oil prices and the vagaries of supply and demand. Even when crude oil prices are stable, gas prices will change if something disrupts the supply. Easy enough to understand, right? But why are prices sometimes radically different in the same neighborhood or even on the same street?

For one thing, the retail price of gasoline is often higher in some states than others. State gasoline taxes are one reason for the price difference. In addition, gas is usually more expensive farther from the source. That's why gas prices along the Gulf Coast are cheaper than gas prices in, say, Idaho. That's because the Gulf Coast is the source of about 26 percent of the gasoline produced in the United States. In addition, oil refineries, which process crude oil into gasoline, are located in that region [source: U.S. Energy Information Administration]. Sorry Idaho.

Gas prices are also more expensive in areas that have fewer gas stations. Even gas stations that are in the same neighborhood, or on the same road, can have radically different prices because traffic patterns might be different. One station might pay a higher rent than another or one gas station might have problems with its supplier [source: U.S. Energy Information Administration].

What's a motorist to do? Don't give up. There are ways to beat the system. Go to the next page and we'll tell you how.

All of these tips require some thought and planning. But what if you're on a road trip? Go to the next page to see how technology can help.

Tips for the Tech-savvy

Looking for a gas station when you're on the road is nothing short of painful, especially if you have screaming kids in the backseat. And if you're looking for the cheapest gas, well multiply that frustration by 1,000. Thank goodness for the 21st century. Our connected society has made it infinitely easier to do many things, including finding the cheapest gas. When you're on a road trip, take your latest gadgets and follow these tips:

Giving it the Gas

Where does your money go when you buy gasoline? In 2010, 68 percent of every gallon of gas went toward the price of crude oil; 12 percent went to state and federal taxes; 7 percent covered the cost of refining crude into gasoline; and 10 percent was earmarked for distribution and marketing expenses [source: U.S. Energy Information Administration] .