How can you use in-car Internet? 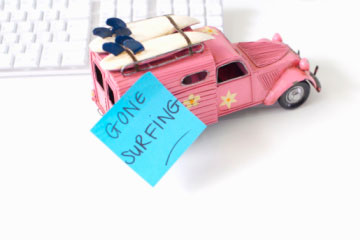 Will the ability to surf the Web be a part of every car salesman's pitch in the future?
Ken Wramton/Riser/Getty Images

Soon enough, the cars we drive will be more than conversation starters, status symbols or ways to get from one point to the next. Instead, they'll be the next platform in a world gone wired. According to the technology research firm iSuppli, 25 percent of cars will be connected to the Internet by 2015 [source: Barry].

In-car Internet might be the way of the future, but going online behind the wheel isn't anything new. In 1997, Toyota launched Monet, a service that allowed drivers to check their e-mail and news headlines, and access their home computers [source: Laterman]. Rival manufacturers rolled out their own automobile Internet services soon after [source: Bartz]. In the United States, satellite radio providers began transmitting traffic reports, weather updates and other data to their systems by the mid-2000s. Still, connected cars -- automobiles tied into the Internet and other communications networks -- are a relatively new phenomenon. ''The idea of connected cars is just starting to take off [in 2011],'' says Wayne Cunningham, senior editor of the Web site CNET Car Tech.

Today's connected cars physically access the Internet in several ways. Some cars, such as those equipped with the Ford Sync system, tap into the Internet connection on a driver's smartphone or a wireless USB adapter. Others, such as the 2011 Audi A8, use a separate data connection built into the car that accesses the Internet through a phone company's data service. There are aftermarket products to enable Internet access in cars as well -- the Autonet Mobile router connects to the Internet through a 3G or 4G cellular connection and allows Wi-Fi-enabled devices in and near the car to go online [source: Autonet Mobile].

Why are carmakers pushing for Internet connectivity in their cars? It's not just consumer demand -- it's the car manufacturers. Cunningham says the nature of auto development cycles means the latest cars tend to lag behind the latest technology. "Carmakers have been struggling with the fact that they want to put new technology in their cars, but they can't keep up because (by the end of) a five-year development cycle, the technology they put in their car could be four or five years old" [source: Cunningham]. By enabling their cars to access the Internet, adding the latest services and features requires a simple software update -- not a new lease.

What can you do with in-car Internet access? Let's take a look. 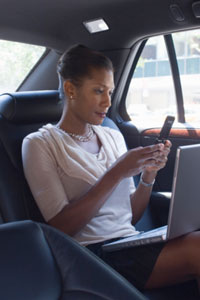 Many in-car Internet features will sync up with smartphones.
Michael Goldman/Photographer's Choice/Getty Images

When it comes to in-car Internet, there are the features and services available at the moment, and then there are the fascinating concepts on the horizon.

General Motors, BMW, Mini and other carmakers have developed their own customized applications. This means that once you install the app on your smartphone and connect the phone to the car's interface (through a Bluetooth connection, for example), the car displays a predefined set of applications on the car's infotainment system -- the term for the technology that enables audio, video, and Internet capabilities. Typically these functions appear on a dashboard-mounted monitor and can be controlled by manipulating knobs on a center console or by tapping areas on a touch screen. A phone equipped with Toyota's Entune app, for example, allows drivers to access the Bing search service, the OpenTable app to make reservations at local restaurants, and other features from a dashboard-mounted screen [source: Cunningham]. Common functions include sending and receiving e-mails, connecting to social networks like Facebook and Twitter, trip planning and navigation, and downloading music and podcasts. According to Cunningham, the personalized streaming radio service Pandora is among the most popular application being integrated into connected cars.

The future of in-car Internet connectivity is full of intriguing possibilities. For example, Ford is developing applications for its Sync system to monitor the blood sugar levels of diabetic drivers and pull up menus for nearby restaurants if their level drops [source: Boyle]. There are apps in development that would process data about a driver's position and offer location-based advertisements and promotions.

In the San Francisco Bay Area, IBM's Smarter Traveler application collects data about a user's driving habits, measures traffic flow in real time, and uses an algorithm to make predictions about congestion to help drivers plan their commutes [source: Boyle]. This is a timely development: Since 2009, the U.S. Department of Transportation's Intelligent Transportation Systems program has been researching ways to develop a more efficient transportation system, using connected vehicles and infrastructure to reduce pervasive problems like congestion, accidents, and carbon emissions [source: U.S. Department of Transportation].

Whether every concept made possible by Internet connectivity comes to market is another matter, Cunningham says, since carmakers are typically conservative about which features they include in their vehicles.

What safety issues arise when cars are connected to the Internet? Read on the find out.

While cars equipped with Internet could help create a safer driving experience, critics say there are hazards to going online in an automobile. One hazard is distracted driving, defined as any activity that takes a driver's focus off the road and could lead to an increased risk of a crash. Statistics from the U.S. Department of Transportation for 2009 tally 5,474 people killed and roughly 448,000 injured in motor vehicle crashes that involved distracted driving [source: U.S. Department of Transportation]. Critics fear that drivers going online create hazards comparable or greater to those of cell phones and other common distractions.

However, drivers already can and do use smartphones in their cars. ''The automakers want to make [using online functions while driving] a safer experience,'' says Cunningham. ''They don't want somebody driving their car, picking up their smartphone, and e-mailing, texting, or using Facebook.'' Many systems allow voice commands that respond to the driver's requests, as well as text-to-speech functions that can read e-mails, Twitter updates, and other prose through the vehicle's speakers. Some systems even prohibit complex features, like programming radio stations, from operation while the vehicle is in motion. Still, there are no laws regulating these systems just yet.

Driver distraction isn't the only issue. Connected cars could also be vulnerable to viruses, malware, and hackers, just like conventional computers. In 2010, a former Texas auto dealership employee disabled and sabotaged more than 100 cars connected to a Web-based system intended to remind drivers of overdue payments [source: Poulsen]. And in 2011, researchers from the University of California San Diego and University of Washington revealed that they had exploited security loopholes in an unnamed connected car and took control of its engine [source: Markoff].

While these episodes raise many security concerns, manufacturers say there are safeguards that can protect automobiles, such as separating the infotainment systems from the systems that control the vehicle's core functions. (According to Translogic, cars with built-in data connections have different vulnerabilities than cars that tether to a smartphone connection [source: Lavrinc].

The quality assurance process a car undergoes before reaching consumers is another safeguard. Cunningham says that new cars are subjected to hundreds of tests in hopes of anticipating and addressing problems before the vehicle goes to the marketplace. ''There are a lot more people involved in quality assurance on a car than in software development,'' Cunningham says.