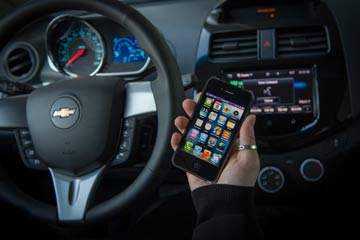 Chevrolet Spark and Chevy Sonic LTZ and RS models will integrate Apple's voice-activated Siri software into their Chevy MyLink systems. Other carmakers are bringing Siri to their autos too.
Steve Fecht for Chevrolet

Anyone who's watched TV recently is probably somewhat familiar with those adorably whimsical Apple commercials featuring a cross section of Hollywood stars that includes John Malkovich, Zooey Deschanel and Samuel L. Jackson shooting the breeze with Siri, the latest bell and whistle added to the company's fleet of smartphones. Yet with the exception of a quick spot with famed director Martin Scorsese chatting up his iPhone in the back of a taxi, most of the ads show Siri and the stars having a ball in the comfort of their homes.

According to recent news from the auto industry, however, Siri appears to be ready to take her show on the road. Carmakers like Mercedes, GM, Ford and BMW are among those reportedly working with Apple to bring Siri behind the wheel -- where she can provide turn-by-turn directions, make calls and select music [sources: Roy, Woodyard].

Those readers not among the legions of Mac and iPad-toting Apple devotees may ask: Who is this Siri, and why do I want "her" in my car?

Siri is the Steve Jobs-given name for voice-activated technology currently available in Apple 4S and 5 iPhones. She allows users to access the full range of smartphone capabilities -- from sending text messages, scheduling meetings and checking the weather to more dated, pedestrian functions like actually making a phone call -- by simply speaking into the phone [source: Apple].

Siri can also answer a slew of questions -- Why is the sky blue? How old is William H. Macy? What's traffic looking like? -- by scanning the Internet and apps for responses to these and other queries. Her dictation capacity extends to non-Apple, third-party apps, meaning users can rely on Siri to update their Facebook status, tweet or send Instagrams.

Just how she'll look as a passenger in car and what she'll be able to do are questions that remain to be answered. "I don't have an opinion on that," one version of the smart little lady recently said in response to a query from the author.

Fortunately, some of the world's biggest auto manufacturers have been less tight-lipped about their plans for integrating the technology into cars, trucks and vans. Read on for a peek at how Siri is getting set to change the way we drive.

How Siri Will Work in Cars

One of Siri's biggest draws is that a driver no longer has to look down at his phone and tap away at the keypad in order to use its capabilities. No more stumbling into potholes, mowing down small children and bashing into newspaper stands. Siri is there at your beck and call. This should allow drivers to focus on the task at hand (driving) and leave other tasks (responding to the Evite for Billy's backyard wrestling extravaganza, for instance) to their voice-activated passenger.

Carmakers like GM, Honda and BMW are working with Apple to develop Siri "Eyes Free," which will let users call on Siri by touching a button on the steering wheel. Originally announced by Apple in June 2012, most rough designs of the technology call for a system where drivers connect a Siri capable device through the car's dashboard, rather than buy cars with Siri already built in. That means accessing Siri via an "Eyes Free" app which can be downloaded to phones. Chevy Spark and Sonic owners, for example, can purchase a $50 app to power a full-featured, in-dash navigation system on their cars' big screen. One advantage of this approach is that the technology can be more easily updated than if it was built in [sources: Yvkoff, Albanesius, Woodyard].

Apple isn't the only player in the tech world looking for dashboard space. Nuance, the brains behind the technology that powers Siri, is also hocking voice-activated systems directly to automakers. Its Dragon Drive platform lets a driver use her voice to command the system to do things like send and read text messages and get directions [sources: Yvkoff]. 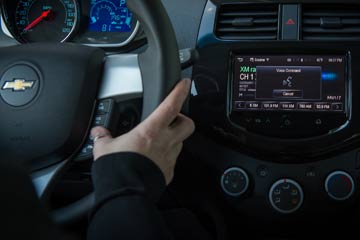 If you're putting off that cross-country road trip until Siri's ready to tag along, gear up by checking out the links on the next page.