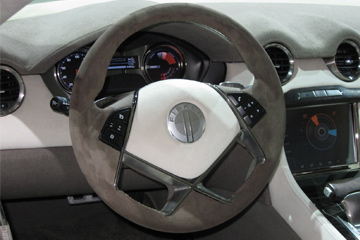 In the past couple of decades, increasingly more functions have been migrating from their traditional positions on the console or dashboard onto the steering wheel. Radio controls, cruise control operation and several others have been integrated into steering wheel technology.

These multi-function steering wheels, as some companies call them, improve driving safety by putting the most commonly used controls in one of the most convenient places possible -- right at the driver's fingertips. A driver's eyes and hands are extremely important tools for driving. Keeping your eyes on the road and hands on the wheel can increase auto safety for everyone in your own car and those around you, too.

It's not surprising, then, to learn that the most commonly used controls have made their way onto the steering wheel

Some cars go even further in using the steering wheel to increase car safety by adding controls for air conditioning, a steering wheel heater, or even access to an on-board computer like the SmartGauge found in the 2010 Ford Fusion.

Most often, these controls are installed at the factory and come with the car when it's new, either as standard equipment or as optional upgrades. Some companies, like Pioneer, even sell steering-wheel-mounted remotes for their aftermarket stereo systems -- again, to improve driving safety.

With all these gadgets installed on the steering wheel, however, are the features and functions any easier to operate or does it actually make it more difficult for the driver to properly adjust everything?

Using steering wheel controls as a method to up the driving safety quotient is about as easy as it comes. Manufacturers simply place the steering wheel buttons in positions where they're easily reached by one thumb or the other without the driver having to remove his or her hands from the wheel. As Jim Morrison, that paragon of rock-and-roll safety, sang, "Keep your eyes on the road, your hands upon the wheel."

Even in the best-designed cars, having things like radio controls in the center console between the two front seats requires the driver to take his or her eyes off the road for a second, or two -- or even more, sometimes -- to locate the volume knob or station preset buttons. Once the driver finds the button or knob they're looking for, one hand has to leave the steering wheel to change the radio station or crank up the volume.

By using steering wheel buttons, all those extra motions can be avoided. At first, the driver may need to glance down to remember which button moves the radio station to the next preset or which toggle switch adjusts the volume. But after using these steering wheel controls for even a few trips, the driver will become accustomed to the placement. With a little practice, your thumbs will switch from your spouse's favorite station to yours and turn up the tunes without ever taking your eyes from the road or your hands from the steering wheel.

Phones that are able to be used with wireless systems like Bluetooth further up the auto safety ante. Many states restrict in-car mobile phone use to hands-free devices. A steering wheel with built-in buttons for sending and receiving phone calls makes the process easier and a lot safer.

But what's beyond these basic controls? Actually, quite a bit. Let's take a look on the next page. 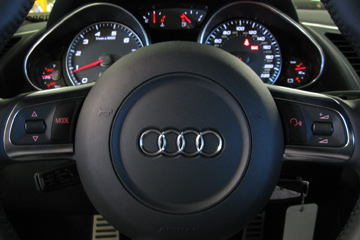 The Audi R8 has its fair share of steering wheel controls, too.
Photo by Kristen Hall-Geisler

As electronics have become smaller, cheaper, and more popular in passenger vehicles, advances in steering wheel buttons have taken driving safety even further, too.

First, the issue of the lowered cost of the necessary electronics has made steering wheel controls more common. This, by itself, improves auto safety across the board -- for everyone on the road. If more drivers are able to pay extra attention to driving and less to reaching for the radio or fumbling for their phone, they have a better chance of reacting to split-second situations that could otherwise lead to accidents.

The new Ford Fusion Hybrid is an example of a very advanced set of steering wheel controls that interface with its SmartGauge on-board computer. The dashboard in front of the driver consists of two LCD displays with a traditional speedometer in the center. Depending on the amount and type of information the driver wants to see, he or she can use the dedicated steering wheel controls to find power usage, battery life, fuel economy and more. This is in addition to the Microsoft voice-activated SYNC system, which can also be accessed from the steering wheel. So it's getting easier and easier to follow Jim Morrison's advice to "Keep your eyes on the road, your hands upon the wheel."