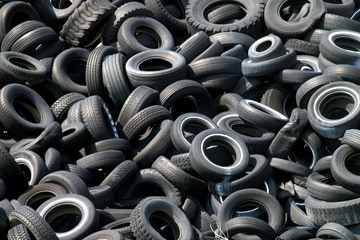 A pile of tires are seen at Kirby Tires outside of Sycamore, Ohio.
AP Photo/J.D. Pooley

From 1994 to 2004, the NHTSA reported that about 400 fatalities occurred in the United States due to tire failure [source: National Highway Traffic Safety Administration]. But a tire's longevity is affected by more factors than just the oxidation issue we talked about on the last page. Other factors that cause tires to fail can be over- or under-inflation, overloading a vehicle beyond an acceptable weight, improper maintenance, structural defects and improper installation of the tire [source: National Highway Traffic Safety Administration].

When an accident occurs, auto part information can be entered into a database for statistical purposes, however, the age of the tire is not usually recorded. So statistics on whether or not older tires are the root cause of tire-related accidents is difficult to nail-down. However, this doesn't mean that a tire's age doesn't have anything to do with tire failure. The NHTSA reported that a tire can lose its elasticity over time, which increases it's chances of becoming dry and brittle on the inside, affecting the car part longevity. When oxidation of a tire occurs, the break down of material properties in that tire can lead to tread separation [source: National Highway Traffic Safety Administration]. Tread separation is when the tread section of a tire peels off from the rest of the tire during use. Oxidation causes the steel belts in the tire to lose their adhesion to the rest of the components. The combination of these factors can then cause the entire tread to separate from the tire, potentially causing a driver to lose at least some control over the vehicle.

The NHTSA has received opposition from some organizations, like the Rubber Manufacturers Association (RMA), which is the national trade association for the rubber products industry. The RMA issued a press release in 2009 stating that, "Allegations that there is a correlation between tire performance and chronological tire age are unfounded and unsupported by data" [source: Rubber Manufacturers Association]. While other car parts and factors may play a role in tire failure, there are many manufacturers including Porsche, Toyota, Ford, Chrysler and BMW who strongly recommend replacing all tires, including the spare, after six years regardless of use or tread wear [source: National Highway Traffic Safety Administration]. The NHTSA is continually studying car part information and the dangers of older tires to provide consumers with more specific data on this issue.

For more about tires and other auto part information, follow the links below.