Browse the article How Long Do Automotive Engines Last? 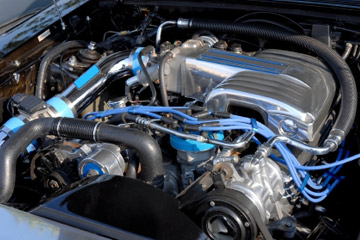 A number of different factors affect the longevity of your car's engine.
©iStockphoto.com/Sonja Fagnan

If there's a car sitting in your driveway right now, there's a good chance it's pretty old. According to a study conducted in March 2009, the median age of passenger cars on American roads was 9.4 years. At the same time, the median age for trucks was 7.6 years [source: R.L. Polk and Co.]. Both of those numbers represent record-high ages for American vehicles. We're keeping our cars and trucks longer than ever before. But while the numbers are telling us that cars and trucks might be lasting longer, what about the individual parts and systems within those vehicles?

After all, car part longevity, or how long various car parts last, is key to how long a car stays on the road. While individual auto parts are (for the most part) easily replaced, if too many fail or break on a vehicle, that car's owner has some calculating to do.

Auto part longevity can be tricky to predict. In some cases, parts break on brand-new cars. Other times, like the case of Irv Gordon, whose 1966 Volvo P1800 holds the world record for highest-mileage car, car parts seem to last forever. If you get lucky and get a good engine and maintain it well, it can last for hundreds of thousands of miles.

As much car part information is out there, the one piece of info that won't be listed on an automotive parts box is exactly how long that specific component will last. While most auto part information will give a general range of how long a particular part should last, that part's longevity actually depends on a lot of factors, including how well it's maintained, how much abuse it takes, and how well it's manufactured.

Of course, some parts are designed to wear out, like an oil filter or brake pads. The good news is that they aren't too expensive and, even though they wear out relatively quickly, most car owners don't mind. When an expensive part wears out, however, the car's owner has to calculate if it's worth replacing or if it would just be a better idea to get a new car. A car's engine is one of its most expensive and most important parts. In this article, we'll learn how long typical automotive engines last, what affects that longevity, how maintaining an engine affects its lifespan and when an engine should be replaced -- as well as how that replacement works. 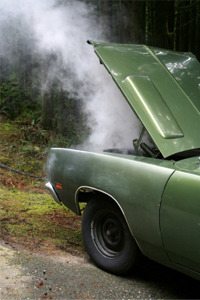 It's nearly impossible to put a hard-and-fast number on how long an automotive engine will last. Car part longevity, including engine longevity, depends on a lot of different factors. However, once you know the factors that affect your engine's lifespan, you'll be better able to predict its potential longevity.

One thing to note, however: Car engines are all different. As any respectable source of car part information will tell you, auto parts are individuals. So while we can give you auto part information on the general longevity of various parts of a car, individual parts may last longer or shorter lengths of time. We know that certain factors affect how long engines and other car parts last, but we can't predict with any certainty specifically how long the engine (or other part) on a particular car will last. As the old saying goes: Your mileage may vary.

The first factor affecting how long an engine lasts is how it's made. Automotive engines can be made from several different metals, but some of the most common are iron and aluminum. In fact, some engines are made of more than one metal. Many trucks have engines with iron blocks and aluminum heads. Generally speaking, iron-block engines tend to be more durable and last longer than other types of engines because, year after year, iron is strong enough to withstand the incredible heat an engine is capable of producing.

How the car or truck is driven also affects how long the engine lasts. The harder an engine has to work, the shorter its lifespan tends to be. Applications like towing heavy loads, repeated extreme acceleration and deceleration, revving the engine past its redline or driving at top speed for long periods of time can all decrease how long an engine lasts.

The most important factor affecting engine longevity, however, is how well the engine is maintained. 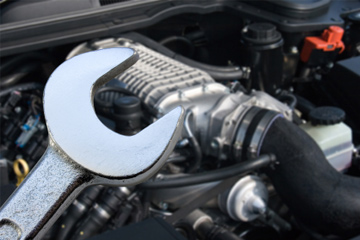 Proper maintenance is critical for all automotive engines.
©iStockphoto.com/Christopher Dodge

While the material an engine is made out of, how well it's built and how it's driven all affect how long the engine will last, engine longevity usually comes down to one thing: maintenance.

Any source of car part information will tell you that preventative maintenance is critical to the lifespan of any car part. Auto parts aren't built to last forever, but by applying the correct auto part information to maintaining your car parts -- especially the engine -- you can make sure the parts last a good long time.

While auto part longevity differs from component to component -- tires, for example, no matter how well maintained, won't last as long as a typical exhaust pipe because rubber brakes down much faster than metal -- with proper care, automotive engines can last a really long time.

One of the most important aspects of engine maintenance is keeping the fluids the engine requires clean and fresh. The engine is the heart of the car, and its fluids are its blood. In your own body, your blood has kidneys and a liver to keep the blood clean -- aside from the oil filter, a car engine can't clean its own fluids. That's why it's important to change an engine's oil regularly, and to make sure that change happens before the oil gets too dirty. Dirty oil in the engine is like dirty blood in your bloodstream. Things may go fine for a while, but eventually it will lead to disaster. Even small amounts of dirty buildup over time can lesson an engine's lifespan.

Finally, pay attention to what your engine is telling you. If your car's gauges say the engine is getting too hot, the oil pressure is low, or if your check engine light is on, don't wait. Take it to a mechanic you trust. 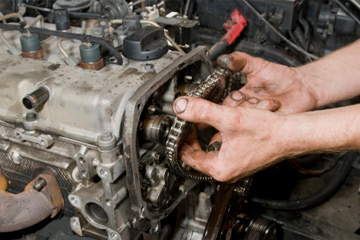 Replacing a car's engine can be a complex task.
©iStockphoto.com/Zoran Simin

Of course, despite your best efforts, you still may need to replace some car parts -- including the engine. While there's a lot of car part information written about replacing components like brake pads, auto part information on replacing an engine can be tough to come by.

Replacing individual car parts is usually pretty straightforward. Auto parts, in general, are meant to be replaced. However, replacing an automotive engine can be difficult since they're not only big and heavy; they're also made up of lots of little parts. Plus, engines have to work with several other systems on the car, including the exhaust, cooling system, transmission and electrical system.

We don't have nearly enough time to explain exactly how to remove and replace an engine. But, in general, the process starts by selecting a new engine that fits the car. Cars only have so much space that an engine can fit in, so even though an engine swap could be a lot of fun, you can save your self a lot of headaches by not attempting to cram a giant V8 into your Mini Cooper. You also should take the engine's weight into account when selecting a new one. The engine may fit in a car's engine bay, but weigh too much for the car's suspension to take. While the suspension can be beefed up, that's a lot of added work and expense.

Once you have the right engine, it's a matter of getting it into the car, hooking it to the transmission, exhaust, electrical and cooling systems. It's actually very complex -- a new engine alone can cost more than $1,000, and when you add in the labor hours to remove the old engine and get the new engine into the car, you're looking at a bill that could easily top a few thousand dollars. Once the new engine is in and all hooked up, it needs its vital fluids. Only then can it be brought to life -- hopefully to be well maintained and last hundreds of thousands of miles.

For more information about automotive engines, auto part longevity and other related topics, follow the links below.