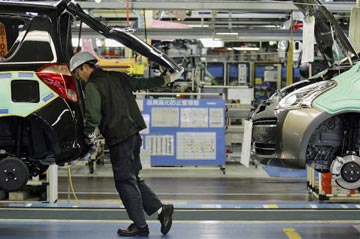 It's a well-known fact around the world that Americans love their cars. And for many decades, Americans overwhelmingly turned to the Big Three automakers -- General Motors, Ford and Chrysler -- to satisfy their automotive lust.

Ford revolutionized manufacturing with the assembly line and automation. These advancements called for producing large numbers of one type of vehicle (even in the same color), keeping the workers as busy as possible and running the plant around the clock. While more was more, it wasn't necessarily better. Very little changed in the car-building process used by American automakers, and until the 1970s, there wasn't much in the way of mass-market foreign competition.

Japan got into the car business almost immediately after World War II. Early attempts by the Japanese resulted in the production of somewhat primitive knockoffs of American designs, and they didn't gain much traction at home or abroad.

Japanese car exports began to rise in the 1950s. Manufacturers faced a skeptical American public who viewed Japanese exports as cheap household products and flimsy, mass-produced junk. However, the founders and leaders of future automotive giants Toyota and Honda were determined to produce cars not only comparable to American cars, but better. Originality and efficiency were the guiding principles, supported by curiosity, an ear for consumers and a desire to improve.

Before long, consumers in the United States (and elsewhere) began to notice the impressive engineering and reliability of Japanese cars, and the Big Three spent much of the 1980s and beyond pleading with domestic consumers to "buy American."

Right from the beginning, the unique Japanese domestic market demanded a different way of producing cars. In the '50s, '60s and '70s, there were fewer potential customers than in America, narrower roads and little in the way of demand for oversized muscle cars. Instead of producing large numbers of a limited number of models, as the American car companies did, Japanese companies focused on finding the most efficient way to make limited numbers of multiple models.

Toyota's profit margin in 2003 was eight times higher than the industry average. In 2008, American-made cars accounted for less than half of American car sales and Toyota overtook GM as the world's largest automaker. One year later, the only two companies to increase sales in an otherwise dismal year were both Japanese companies, Subaru and Hyundai [source: Newman].

Next: Can you improve a system that improves itself?

Despite their relative late entry to the race, Japanese automakers always looked far ahead. In the 1950s, they made large investments in infrastructure and technology during a time when American automakers were content to continue production in factories that hadn't had systemic upgrades in almost 30 years.

Japanese government entities played a large part in raising the bar for Japanese engineering, often setting goals that, even when impossible to reach, prompted competition and innovation among rival Japanese car manufacturers.

Following a worldwide economic slump in the mid-1970s caused in part by the 1974 oil crisis, Toyota emerged a stronger company, due to Toyota's managerial and production philosophy of kanban (in English, "just in time").

By planning the ordering of materials so that needed components arrived at production plants almost exactly when they were needed (and only in the precise quantity needed), Toyota hoped to eliminate waste and the need for any excess inventory on hand.

The "just in time" system (also known as the "pull system") has been likened to the filling of a car's gas tank. Just because you have the capacity to do so (access to a gas pump) doesn't mean you fill your gas tank every day. We generally wait until we're low on gas, then restock. While American car companies were enjoying the ability to metaphorically pump gas into tanks whether it was needed or not, Toyota (and eventually other Japanese companies) waited until the "empty" light turned on.

Toyota manufacturing focuses on quality and efficiency, but also on kaizen: self-improvement and continuous learning. Employees, vendors and members of the management team are taught to challenge their own assumptions and to learn more about problems or processes by putting eyes and hands on the situation.

In 1994, a two-year effort to design an environmentally friendly global car of the future resulted in Toyota's design of the Prius, the world's first hybrid fuel-electric vehicle, which hit the Japanese market in 1997. 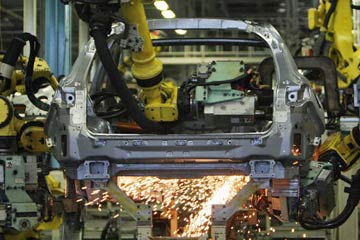 Robots assemble parts at Nissan's Tochigi plant in Kaminokawa, Japan. The plant produces models such as the Infiniti and the GT-R supercar as well the latest Fuga.
Junko Kimura/Getty Images

The 1970s saw many advances made by Japanese automakers: continued modernization of the production process, new safety standards, development of the strictest emissions standards in the world and engineering geared toward better fuel economy.

American automakers adopted these measures once the value (and positive perception in the marketplace) was proven. But American automakers are no slouches themselves: Though they struggled through periods in the 1970s and 1980s, they were still selling cars all over the world. Chrysler changed family transportation forever with the unleashing of the first mass-market minivan, the Dodge Caravan, and in the 1980s, Ford began using its truck bodies for SUV production. Successes like these didn't serve to increase any desire to learn from the Japanese.

While profiting for the better part of 20 years on large trucks and SUVs, American car companies didn't expect or plan for the steep drop in consumer interest in these gas guzzlers as volatile gas prices topped $4 a gallon.

Toyota was the first to plunge into the world of mass-produced hybrid and electric vehicles, and because of that, they enjoy a continued technological advantage over the rest of the world in producing these types of autos. But success for some Japanese automakers doesn't mean success for all -- Nissan and Mazda didn't share in the success in the 1990s and struggled to adopt Toyota's processes along with their American counterparts.

While the Big Three have focused on creating innovative products, the Japanese automakers have been streamlining the processes responsible for those products, and remain the worldwide leader in the implementation of "just in time" production systems.

By the 1990s, GM, Ford and Chrysler each took Toyota's products, progress and processes seriously and began implementing their production methods. However, a gulf remains: While American companies adopted the system, they didn't necessarily adopt the philosophy. Toyota had been utilizing, developing and improving upon its system since the 1940s, and it continues to refine and improve its own system. That's part of the system. It's not a top-down directive, but a company-wide philosophy to constantly improve processes, policies and personal performance. American automakers still tend to push themselves with a "bigger is better" philosophy, while Toyota has actually adjusted its goals to stop chasing market share and concentrate on building affordable cars that consumers want to buy.