What are fit and finish and why do they matter? 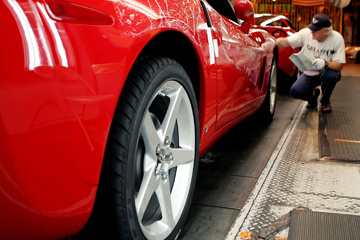 In the automobile manufacturing industry, the term fit and finish refers to the way the parts of a car go together. Does the hood join smoothly with the fender assembly, so that neither sticks out and the gaps between them are barely visible? Is the paint job smooth and even, with no unintended variations in color? Does the upholstery sit firmly on the seats with no untrimmed edges? Do the doors close tightly? If so, the car has perfect fit and finish -- and that means a lot.

When a customer looks at a car with an eye toward buying it, he or she may not consciously notice the fit and finish. In fact, chances are good that the potential buyer may be more concerned over what kind of mileage it gets or how powerful the engine is. But even as the customer kicks the tires there's an unconscious visual assessment of the entire vehicle underway. On some level the customer is aware that if the manufacturer got the fit and finish right, then they care about details and probably got other things right as well. Besides, nobody wants a shoddy-looking car. What would the neighbors think?

The auto manufacturing industry knows this, too. They know that tiny things count and that an imperfect fit and finish can hurt sales. So there are entire departments at major car makers that work almost exclusively with fit-and-finish issues, using sophisticated, high-tech machinery that analyzes the way parts fit together on the level of one or two millimeters. The machinery used on modern assembly lines to analyze fit and finish looks like something out of a science fiction film, with laser beams, robotic eyes, and a combination of humans and computers doing the actual final inspection. In recent years the American auto industry has even partnered with the National Institute for Standards and Technology (NIST) to improve its ability to measure fit and finish.

On the next page, we'll look in detail at the importance of fit and finish, and examine both the devices used to inspect it and the penalties automakers can expect if they don't pay enough attention to details.

Importance of Fit and Finish

In the 1970s, many observers feel that the automobile manufacturing industry in Detroit, Mich., made a serious misstep. It started paying too little attention to quality control issues like fit and finish. Gradually, this tarnished the image of American carmakers, not only in the United States but around the world. At the same time, Japanese auto manufacturers were far more aware of fit and finish issues. Companies like Toyota began turning out cars that simply looked (and often ran) better than American cars. By the 1980s, the Japanese auto manufacturing industry dominated the automotive world and Detroit has never quite recovered, as the economic crisis of the early 21st century made quite clear.

Of course, fit and finish weren't the only reasons Japanese cars stole a march on American carmakers. Their cars were also, by and large, more reliable and more fuel-efficient. But fit and finish were still important. What Japanese auto makers were doing right can be summed up in two words: quality control. The Japanese adopted stringent quality control measures to make sure their cars excelled. Some attribute the success of these methods to a Japanese tradition of teamwork and personal investment in the products being produced. Whatever the reason, Americans soon came to feel that Japanese cars were better than the domestic product, especially in the area of fit and finish.

Nowadays the major auto makers all have quality control departments, often staffed by experts in metrology, the science of measurement. These experts have brought with them sophisticated measuring tools that can check (almost instantly) the precise dimensions of cars and sub-assemblies as they move down the production line. The most advanced of these tools use laser triangulation to produce a three-dimensional model of the components, so that they can be checked by a computer (or by a human computer operator) to determine if, say, a door doesn't close tightly enough. If so, the entire assembly line can be shut down until someone determines what went wrong and fix the problem. These laser scanners can be attached to robotic arms in the factory so that they can perform their job without a human being present. They can detect small variations based on a predefined CAD (computer-aided-design) model already stored in the computer's memory.

In the late 1990s, the American auto industry joined forces with the National Institute for Standards and Technology (NIST; formerly the Bureau of Standards) to produce what was known as the "2-millimeter assembly process," which could hold dimensional variations in auto assembly, which had previously been accurate only within 5 or 6 millimeters, to within less than 2 millimeters. The result, according to some observers, was an immediate improvement in fit and finish at both GM and Chrysler.

Fit and finish isn't just about perceived quality, of course. If there's a gap between the door and the rest of the car's body, air can come whistling through noisily as you drive and produce a chilling interior wind in cold weather. And rain can leak into the car, damaging the upholstery or getting passengers wet. It can even ruin the aerodynamic profile of the vehicle. So poor fit and finish have very practical consequences, too.

Are fit and finish as important as having reliable brakes or a fuel efficient engine? Probably not. But the lesson of the last few decades is that if automobile manufacturers ignore fit and finish, they do so at their own peril.

For more information about automotive fit and finish and other related topics, follow the links on the next page.

Will natural-gas cars ever be suitable for consumer use?
What are my car towing options?
What will "luxury car" mean in 2030?