Synthetics Are Expensive, and Probably Worth It 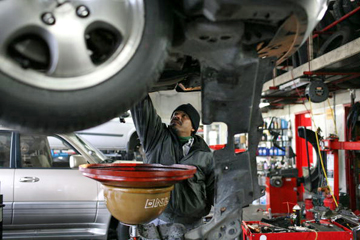 If you don't mind the hit to your pocketbook, you may want to ask your mechanic to upgrade your oil to synthetic.
Justin Sullivan/Getty Images

The biggest downside with synthetic oil is its significantly higher cost. However, there's another major caveat to using synthetic oil, especially if you're looking for inexpensive lubrication. In some instances, cheap synthetics have inferior additives that deteriorate quickly, leaving behind low-quality oil that might actually be second-rate to conventional oil. In other words, skimping on a synthetic may actually leave you worse off than you'd be with a mid-grade mineral oil.

You may have heard that you can't mix synthetic oils with their conventional counterparts. The truth is that synthetics are compatible with conventional oil and can be used in both new and old cars. What's more, you can switch back and forth from conventional and synthetic as often as you like without problems -- they're fully compatible.

On balance, synthetics offer many benefits that most conventional oils lack. Synthetic oils, whether alkylated aromatic, PAO-, or ester-based, offer better flow characteristics than petroleum-based oils in low temperatures, even on startup, which is when the greatest amount of engine wear occurs.

What's more, some car manufacturers are actually beginning to recommend full synthetic oils for brand-new vehicles. Of course, no matter which vehicle you own, you should always check your owner's manual before selecting a motor oil for your car or truck.

For many vehicles, synthetics may be a better choice for overall engine operation. The biggest factor affecting your selection of lubrication may simply be cost. But if you really want the best possible protection, and if you like the idea of fewer oil changes, upgrading to synthetic oil is the obvious choice.

If you'd like to learn more about oil and other related topics, motor over to the next page.