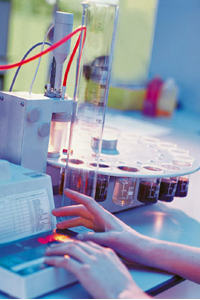 Synthetics have a petroleum base, but their lab-created components make them superior to conventional oil.
Monty Rakusen/Digital Vision/Getty Images

The American Petroleum Institute (API) divides oil types into five groups. Groups one through three are conventional motor oils. Groups four and five are made up of various types of synthetics.

Good synthetic oils often use a combination of up to three different synthetic base fluids, including synthetic esters, polyalphaolefin (PAO) and alkylated aromatics. Regardless of the exact chemical makeup, synthetics share similarities. Whereas conventional oils contain molecules of varying sizes, the molecular structures in synthetics are consistent in mass and shape. This uniformity means those molecules create less friction as they collide, and less friction means less heat.

In essence, each synthetic manufacturer can create designer molecules to create oil with specific performance properties. They also mix in additives and other liquids such as detergents, dispersants, antioxidants, friction modifiers and anti-wear additives, all in varying amounts tweaked to result in an exact blend for specific environmental conditions.

As a result of this control over chemistry, synthetics have a number of significant advantages over conventional oil. You already know that synthetics flow better in cold weather, making engine starts easier and offering better protection. In addition, synthetics resist viscosity changes at extremely high temperatures that can break down or evaporate molecules in conventional oil. When this kind of deterioration happens, metal-on-metal contact may occur, causing permanent damage to the engine.

Because synthetics are slicker than conventional oil, they allow for smoother, cooler engine operation. That means more horsepower and better gas mileage. But in some cases, that same super-slick consistency may exacerbate existing internal or external engine leaks, resulting in blow-by and burn-off. Keep in mind that this happens only in engines where leaks are already an issue.

Some pundits also claim that synthetics are so slippery that in brand-new engines, the lubricants prevent proper break-in of motor components. And then there's the indisputable fact that synthetics cost at least twice as much as conventional mineral oil. However, that increase in cost is offset by the longer intervals between oil changes. Instead of 3,000 miles (4,828 kilometers), you can push off oil changes for every 7,000 miles (11,265 kilometers) or so. Some experts say you need to drain synthetics only at 25,000-mile (40,234-kilometer) intervals.