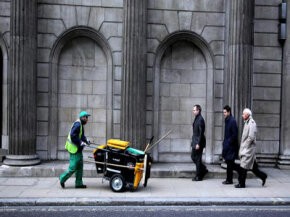 An old-school street-sweeper at work in front of London's Bank of England.
Gareth Cattermole/Getty Images

­Mechanical street sweepers aren't as old as the streets they clean, but it might surprise you to learn that they do predate the automobile. Like many inventions devised during the Industrial Revolution, the street sweeper's actual parentage is a bit unclear. Some sources claim C.S. Bishop invented a mechanized street sweeper in 1849, while others say C.B. Brooks, inventor of the paper hole puncher, came up with his street sweeper truck in 1896.

In any case, by the time the automobile became widely available in the U.S. in the early 20th century, street sweepers were already on the scene and keeping things clean. Officials for the city of Boise, Idaho, bought the first Elgin street sweeper in 1914, and the Illinois-based company has been in business ever since.

­The first mechanical street sweepers may have predated the automobile, but they would have relied on horse-drawn carts to move about the city. The street sweeper truck ushered in the use of horseless carriages (you might know them as cars) to move the street sweeper around town. As technology has improved and environmental concerns have become more important, street sweepers have become quieter, cleaner and more efficient. Some are even using alternati­ve fuels as we continue on into the 21st century.

Uses of street sweepers have expanded along with the technology. City streets, construction sites, airport runways, never-ending parking lots -- if it's paved, it likely needs to be swept. There are portable little sweepers that can be towed to a work site and indoor versions that keep the cement floors of massive warehouses and industrial sites clean.

Now that we know where they came from and how they're used, let's learn how street sweepers actually work.

First, they take the broom and swish it left, then they swish it right -- okay, street sweepers haven't been men with brooms for more than a century. These days, they're drivers steering boxlike vehicles that look like a cross between a Zamboni machine and a dump truck.

Conventional street sweepers have jets under their trucks that shoot water onto the street's surface to keep flying dust particles to a minimum, while spinning brushes scrub the dirt free from the streets and gutters. A cylindrical brush under the truck sweeps the debris onto a conveyor belt that leads to a storage container. Sometimes, instead of the cylindrical brush, a vacuum-like mechanism will suck the debris into the container.

Regenerative air sweepers, on the other hand, have hydraulic systems that use air jets to churn up the dirt on the road, then swirl it toward the center of the truck. Negative pressure under the truck creates a vacuum that carries the dirt up into the receptacle at the truck's rear. Filters clean the air in the receptacle and reuse that air to loosen debris on the street, while water is sprayed to keep down the dust.

Some sweepers use spinning brushes instead of regenerative air or water to get the debris underneath the truck, where a vacuum moves it into the storage hopper. These models are usually smaller than the big street or highway sweepers, and they're used at industrial sites where cleaning up particulates is paramount.

Let's move on to how these machines are used in our everyday lives, and what innovations we're seeing in the street sweeper's third century. 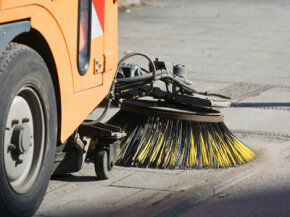 We call them street sweepers, but the same mechanical surface cleaners can be customized to pick up just about any kind of debris from almost any surface. Sweepers can range in size from full trucks to portable, towable machines. The largest trucks are big enough and can go fast enough to drive on and clean up highways. They do have to slow down to do the actual cleaning, however; trying to sweep the highway at 70 mph (113 kph) just isn't going to work.

Little three-wheeled sweepers are far more maneuverable for cleaning between shelving units in a warehouse, for example, or any place where tight turns and limited space are an issue. There are sweepers built specifically for dumping collected debris in tall containers or trucks and sweepers that can empty their hoppers into low-lying containers. Some sweepers, like the Elgin GRV, are made specifically to remove de-icing solution from airport runways before it can seep into the groundwater.

Street sweepers do much more than just keep things clean. They're used to pick up trash, dirt, chemicals, motor oil and more that can contaminate the environment. If these potentially harmful substances are removed from the street, the construction site, or the parking lot before they reach storm drains, they are less likely to end up in rivers and lakes.

The United States government has already taken steps to combat this type of pollution. In 1987, the Environmental Protection Agency (EPA) enacted the PM-10 standard, which regulates the number of particles in the air that are 10 microns (.001 centimeters, or .0004 inches) or smaller. These particles are small enough to affect our health because of their ability to reach the lower regions of our lungs. Most street sweeper manufacturers have several machines that meet PM-10 removal standards, keeping our streets cleaner and our lungs clearer. Street sweeper makers need to stay on their toes, though -- the EPA is considering lowering the standard to PM-2.5, or regulating particle matter measuring 2.5 microns (.0001 inches) or less.

Some areas have policies regarding the amount of pollution the street sweepers themselves emit. For example, The South Coast Air Quality Management District in California -- which covers the smoggiest section of the U.S., including Orange County and most of Los Angeles -- has instituted Rule 1186, which requires any new large, outdoor street sweepers to run on alternative fuels. Many companies have machines that comply with Rule 1186 for sale across the country. They usually run on compressed natural gas (CNG), liquefied petroleum gas (LPG) or liquid natural gas (LNG).

All this technology isn't cheap: A conventional, mechanical, brush-using street sweeper costs in the neighborhood of $100,000. A vacuum-assisted model will cost $150,000 or more, with alternative fuel engines and pollution compliance driving up the dollar amount to more than $200,000. But that's a small price to pay to keep lungs (and gills) free and clear of contaminants.

Up Next
How Repo Trucks Work
Explore More 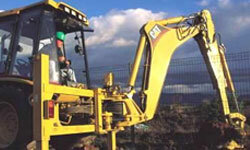 You May Like
How Hydraulic Machines Work
Explore More