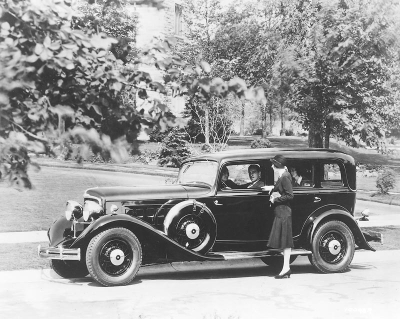 Reo resulted from a 1904 argument at Olds Motor Works, the first car company founded by the tenacious Ransom Eli Olds. When colleagues began pressuring him to build four- and six-cylinder models that were more substantial than his little Curved-Dash Oldsmobile, Ransom ventured down the street to set up a rival concern. By year's end, this new R.E. Olds Company was called Reo Motor Car Company, after his initials. Ransom got his "revenge": through 1917, Reo outproduced Olds Motor Works.

From the company's beginning to 1919, Reo fielded one-, two-, four-, and six-cylinder cars. The firm's all-time production record, 29,000, came in 1928, by which time Reo was selling sixes only. After seeing car sales fall almost 30 percent in calendar-year 1929, Reo posted a $2 million loss on 1930 volume of about 12,500 cars and a like number of trucks. The Depression had hit, and Reo was mortally wounded. But even though the company never sold more than 5000 cars a year after 1932, some of those it did sell were memorable, and among the handsomest automobiles ever created.

The Flying Cloud Sixes of 1930 were little changed from 1929. That year's junior Reo was the 115-inch-wheelbase Model 15, basically the previous year's low-priced Flying Cloud Mate with the same 60-bhp, 214.7-cubic-inch Continental engine. Senior models, now called Flying Cloud Master, comprised the 120-inch Model 20 and 124-inch "25" powered by a 268.3-cid Reo engine with 80 bhp. Prices were in the upper-middle bracket at $1175-$1870 (after Depression-prompted cuts). Styling, by the talented and once unappreciated Amos Northup, was classic, formal, and finely proportioned. Workmanship was solid, furnishings top-quality.

January 1931 brought an expanded line that ultimately offered two new straight-eights. Model nomenclature denoted cylinders and wheelbase. The larger eight, delivering 125 bhp from 358 cid, was reserved for magnificent new 8-35 Royales on a strong double-drop frame with 135-inch wheelbase. It also powered companion 8-30 Flying Clouds. Anchoring the line was the new 6-25 with 85-bhp 268 six, selling at around $1800.

The Royale premiered at $2495 with three closed Murray-built bodies. All were smooth and truly beautiful, Northup pointing the way for everyone else with skirted fenders, rounded corners, and raked-back radiators. The 8-30 and 6-25 wore a more conservative version of this look. Reo also announced an immense new 152-inch Royale chassis for custom coachwork by Dietrich, comprising an imposing seven-passenger limousine and three convertibles. But apart from show models, few of those opulent Reos were ever built. Though all Royales had effortless performance with their big nine-main-bearing engine, they were hardly appropriate for hard economic times.

Still trying hard, Reo unveiled a smaller Flying Cloud in January 1932, the 117-inch-wheelbase 6-S. Carrying a debored 230-cid six with 80 bhp, this new entry-level line listed nine open and closed models in Standard and DeLuxe trim for $995-$1205. Eight-cylinder Clouds returned virtually without change. So did Royales, but the 8-31 and 8-35 were now nameless, and 8-52s were retagged Royale Custom. Of course, everything hinged on the 6-S, but it failed to make the needed impression, and Reo car sales fell to 3900 for the calendar year. Desperately seeking cash, the firm agreed to sell 6-S bodies and chassis to equally beleagured Franklin for that company's 1933 Olympic, which was nearly identical except for grille, hood, and air-cooled Franklin power.

With all this, Reo had no choice but to drastically cut its 1933 line. Thus, Flying Cloud Eights vanished in January. So did the 6-25, though its engine returned in a new low-end S-2 Flying Cloud that replaced the 6-S on an inch-longer wheelbase. The longest chassis was also dropped, leaving N-2 standard and Elite Royales on the 131-inch platform and N-1 Customs on the 135-inch chassis. Prices were cut too, but the cuts weren't enough to matter. Despite smoother styling and sturdier new X-member frames, Reo's calendar-year registrations fell to 3623, the lowest on record. 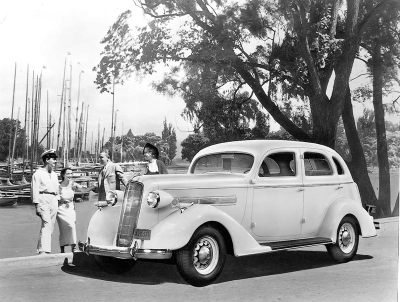 The 1936 Flying Cloud, such as the one shown here, was one of Reo's final cars.

Most 1934 Reos appeared in July and September of 1933, essentially carryovers save more deeply skirted fenders and an eye-catching array of six vents per hoodside. Headlining the "real" "34s, unveiled in April, was the new S-4 Flying Cloud with nice streamlining and an optional built-in trunk for four-door sedans, though most everything else was continued from the S-2 and interim S-3 models.

Arriving in May 1933 was the "Self-Shifter," a new freebie for Royales and an $85 extra for S-4s. This was a semiautomatic transmission developed at a cost of about $2 million amidst mounting corporate finacial losses.

Innovative and dependable, the Self-Shifter replaced the conventional gearlever with an under-dash T-handle. Pushing the handle to "Forward" brought access to a pair of driving gears that changed automatically according to road speed. You pulled the handle halfway out for Neutral, all the way out for "emergency low," which also had two automatic ratios. For Reverse, turn the handle right, then pull out. The clutch pedal was used only for starting off.

Nice though this was, the Self-Shifter attracted few buyers. But surprisingly, Reo's calendar-1934 car output was slightly higher at 4460, and truck sales jumped a startling 70 percent.

Some experts cite the Self-Shifter's development cost as a key factor in Reo's demise, but management turmoil since the Great Crash also contributed. When Ransom Olds moved up to board chairman in 1923, new president Richard Scott greatly expanded production, which left Reo with money-losing excess capacity when the Depression severely shrunk the medium-price market.

At Old's insistence, Scott was replaced in 1930 by William Wilson, an executive of the Murray Body Company. But when Wilson couldn't halt the sales slide, Scott got another chance. That angered Olds, yet Scott's supporters were entrenched, prompting the founder to resign in December 1933. That shook up embattled Reo stockholders, who persuaded Olds to return the following April and elected Donald E. Bates as president. Hopes were high that things would turn around.

Meanwhile, the S-4 continued into 1935 as the little-changed S-5, and Eights gave way to a lowly S-7 Royale Six coupe and sedan, essentially S-5s with a 95-bhp engine selling for $985. Both were gone by early 1936, a sorry end for the once-mighty Royale.

But somehow, Reo managed yet another new Flying Cloud for 1935. Designated A-6, this offered two- and four-door Hayes-built fastback sedans with 115-inch wheelbase and a superior new 90-bhp 228-cid six with seven main bearings, aluminum head, automatic choke, and external vibration damper. Front styling vaguely recalled Auburn, with flared fenders and vee'd bumper. For all that, Ransom Olds disliked the A-6, calling its $450,000 tooling cost a waste of money.

But as at Olds Motor Works long before, his colleagues disagreed, and they pushed ahead for '36. They were doubtless encouraged by Reo's first profit in years, a slim $42,156 for the first half of 1935 on meager sales of cars and trucks. Still seeking to bolster income, the firm shared its body dies with erstwhile rival, Graham-Paige.

Reo announced "America's Finest Six" in November 1935, but it was just an A-6 with fuller fenders, rubber-tipped bumper guards, optional "Zeppelin-style" fender lamps, and a reworked hood and radiator wearing bright trim a la Pontiac's "Silver Streaks." The Self-Shifter was canned for conventional over-drive as a $50 extra for standard and DeLuxe models priced at $795-$895. But public confidence in Reo had nearly evaporated, so the firm built a mere 3206 cars that year, versus 4692 for calendar-year 1935.

With trucks now far more profitable than cars (the G-P deal had produced little revenue), the Reo board voted on May 18, 1936, to move truck assembly into the main Lansing plant; on September 3rd, Reo officially left the auto business. Though the company lost nearly $1.4 million on its 1936 cars, it was able to write off $604,000 for terminating its auto operations. Reo then turned exclusively to the truck field. Ironically, it would thrive there far longer than it had with cars, producing for the next 40 or so years under the Reo and Diamond-Reo nameplates.