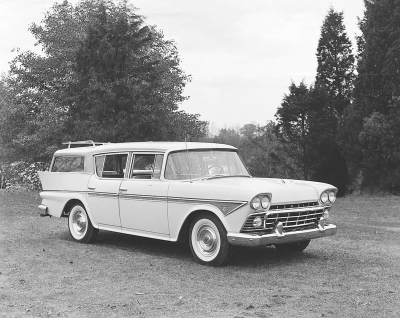 Regular Ramblers weren't ignored for '58, receiving a complete reskin that made the '56 bodies look a bit bulkier on unchanged wheelbases. Little canted tailfins and dual head-lamps (moved from within the grille back to the fenders) were new styling touches. Hardtop wagons were omitted.

AMC also adopted then-trendy pushbuttons for its optional Borg-Warner "Flash-O-Matic" self-shift transmission. Though V-8 cars were now called Rebel, they retained the 250 engine, which was boosted to 215 bhp. Sixes, now with 127 or 138 bhp, remained nameless, and were again far more popular -- no real surprise.

What did surprise observers was a new 117-inch-wheelbase line called Rambler Ambassador. AMC brochures implied you should think of it as a distinct make ("Ambassador by Rambler"), but this was simply the 108-inch-wheelbase platform with nine extra inches ahead of the cowl, plus a standard four-barrel 327 V-8 with 270 bhp. Offerings comprised the usual four-door sedans, Country Club hardtop sedans, and pillared and pillarless wagons in Super and Custom trim.

Visually, these Ambassadors were nothing like their Nash forebears and everything like regular '58 Ramblers. The only differences, other than the added length, were nameplates, a fine-checked grille, broad swathes of anodized aluminum on Customs, plusher interiors, and arguably better proportions. This is what the '58 Nash and Hudson would have been had those brands not been dropped at the last minute. In fact, the Vee'd front bumper guard of the '58 Ambassador was taken directly from the stillborn Hudson, which had been all but locked up by late 1956 along with a more nearly identical Nash.

Interestingly, the '58 Ambassador virtually doubled full-size '57 Nash/Hudson volume, model-year production totaling 14,570. Rarest of the breed -- just 294 total -- was the Custom Cross Country hardtop wagon, the only such model in AMC's '58 line. Despite Ambassador's modest sales, Rambler's '58 total of 162,182 was up 77 percent from '57 -- a fine showing in a generally disastrous industry year. The success ended four straight years of losses for AMC, which scored a $26 million profit on sales of $470 million.

This winning formula netted another $60 million profit on 1959 Rambler volume of nearly 375,000 -- a new record for the fledgling firm. Ramblers and Ambassadors received more complicated body trim, plus a beltline that curved up gently at the rear doors to blend more smoothly with the finned fenders. Ambassadors got a more ornate grille with a big "floating" hori­zontal bar. Powertrains were unchanged. Unlike most competitors, AMC had evidently decided the horsepower race was over.

Indisputably, the rush to compacts was on, and both Americans and the standard Ramblers had new competition in Studebaker's pert '59 Lark. Perhaps anticipating this, AMC expanded that year's American line by reviving the old two-door 100-inch-wheelbase wagon. Also offered in DeLuxe and Super trim, the compact hauler helped the smallest Rambler rack up 91,000 model-year sales. The bigger Ramblers also did very well in 1959's modest industrywide recovery. Ambassador took a satisfying leap to 23,769; standards attracted over a ­quarter-million sales. The latter were again mostly sixes, as Rebel V-8s found just 16,399 customers.