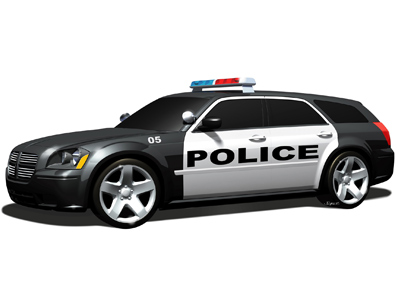 The Hemi engine is standard issue in the Dodge Magnum police car package that debuted in September 2005 for the 2006 model year.
AP Photo/Dodge

Take a moment to consider the kind of abuse a police car has to endure. At one extreme, it might be pushed to the very limits of its performance, chasing fleeing suspects at speeds greater than 100 mph (161 kilometers per hour). It might be driven over rough terrain, smashed into by angry criminals, or used as a battering ram by the officer behind the wheel.

At the other end of the spectrum, a police car could spend all day sitting in one place, idling for hour after hour or cruising along at low speeds as the officer waits for speeders or patrols a suburban neighborhood. A police car has to do this under relentless summer sun and in the depths of frigid winter nights, and it often has to switch from "idle" to "action" in a split second. While doing all this, the car needs to provide enough power for the radio systems, a computer, lights, sirens and any other equipment that might be installed on the car. As if all that weren't enough, police cars are heavy -- about 1,000 pounds (454 kilograms) heavier than their civilian counterparts, depending on the model and what options are installed. It's important to remember that the primary goal in designing the average police car is not power or performance, but durability.

To get the job done, a police car needs some heavy-duty components:

In the next section, we'll find out what other special equipment is installed in a police car to help officers do their jobs.