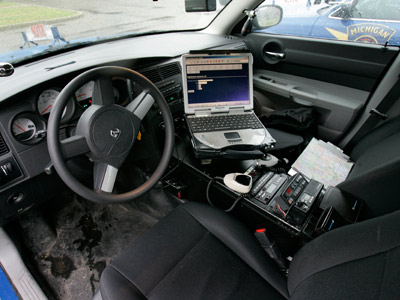 When a manufacturer assembles a "police special" at the factory, they often don't actually install a lot of the equipment that officers will ultimately need in the car. That's because each police department has its own policies and needs, and even within a department, different cars may be outfitted with different gear. Therefore, the departments handle the installation themselves, either through a local shop or, if the department is large enough, using their own mechanics.

One of the first things people notice about a police car is the paint scheme. In the United States, there is no unified criteria or standard for painting police cars, so each state, agency or municipality determines how its cars will be painted. The point of the paint job is to make the car look distinctive and easy to see, but this can range from the classic "black and white" look, common in the 1950s and '60s, to more elaborate paint schemes with stripes and lettering.

The light bar on the roof is another key element, and the roof is reinforced at the factory to hold the extra weight of the bar. Modern light bars are streamlined, and contain banks of multiple lights in red, blue and white, all of which spin and pulse in patterns which are tough to miss, even in daylight.

The siren noise made by a police car is generated by a fan that pushes pulses of air through specially shaped holes in a small drum. The resulting sound is incredibly loud. Modern siren systems can automatically control the air pulses to generate a variety of sounds, such as the hi-lo (commonly used in Europe), the yelp, the wail, and the loud squawking sound of the air horn. You can listen to some police sirens sound demonstrations at Galls.com.

Police use wideband radios that broadcast on special frequency ranges set aside for their use in the VHF and UHF bands. Officers can also route the radio microphone through speakers integrated into the siren, allowing them to use it as a public address system.

Instead of an arm rest, modern police cars have a swivel mount for a laptop computer. Officers use this computer to access a number of databases, to fill out paperwork and record witness statements while they're still at the scene. The computer can also be used to upload digital photos they've taken of crime scenes. Some departments utilize wireless technology, so officers can check license plate numbers or suspect IDs against a database of stolen cars or outstanding warrants. They can even get a suspect's criminal record and photograph on screen right in front of them, without having to relay information through a dispatcher.

Have you ever wondered what's in the back seat of a police car? Find out in the next section.