The Packardbaker and the End of Packard 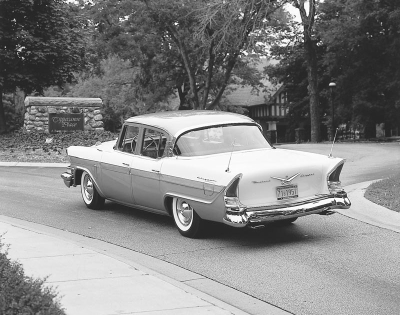 The 1957 Town Sedan bore the Packard name, but the design and manufacturer was Studebaker all the way through.

Packard was now sinking fast, being pulled down with Studebaker. Including Clipper, 1956 production totaled 28,835 cars, just slightly more than half of '55 volume.

Studebaker-Packard had planned an all-new 1957 corporate line that included a shared bodyshell but totally different looks for Studebaker and Clipper, plus a much larger separate platform for a group of high-luxury Packards styled in the image of Dick Teague's 1956 Packard Predictor show car.

But S-P was on the ropes, so no financial backing could be found, leading Nance to resign in August 1956. (He soon resurfaced at another ill-fated outfit: the new Edsel Division of Ford Motor Company.)

Salva­tion finally arrived in the form of Curtiss-Wright Corporation, which picked up Studebaker-Packard as a dalliance and/or tax write-off. C-W's Roy Hurley began directing S-P's affairs. One of his first decisions was to end Packard production in Detroit and substitute Studebaker-based models built in South Bend.

Thus appeared a new Packard Clipper for 1957: the infamous "Packardbaker," as many have since called it. Though a very good Studebaker, it was hardly in the same league with the '55-56 Packards. It came in just two models: four-door Town Sedan and Country Sedan station wagon.

The sedan was on Studebaker's longer 120.5-inch chassis while the wagon was on a 116.5-inch chassis. A supercharged Studebaker 289-cid V-8 delivered the same 275 bhp as on '55 Caribbeans and '56 Executives, but Ultramatic, Torsion-Level, and other "real Packard" features were gone.

Styling, at least, played on Packard themes. Prices were higher than for comparable Studeys: $3212/$3384. But everyone recognized this as a charade, and only about 5000 of the '57s, mostly sedans, were bought.

A big-Packard revival was still theoretically possible as the '58s were planned, so S-P again tried a holding action. This time there were four "Packardbakers" priced as high as $3995. Stude­baker's shorter 116.5-inch platform carried a two-door hardtop and four-door wagon, the 120-inch chassis a sedan and the Packard Hawk. The last, perhaps the most-famous of this series, was a more-luxurious version of Studebaker's Golden Hawk.

All featured full-leather interiors and bizarre styling announced by low, "fish-mouth" grilles. In defense of stylist Duncan McRae, the Hawk was really built only because of Roy Hurley, who also dictated its long, bolt-on fiberglass nose and gaudy gold-mylar tailfins.

McRae, however, gets the blame for the Hawk's outside "armrests" and styling on the other three models: also garishly finned, and with hastily contrived four-headlight systems to keep up with an industry trend. Only the Hawk was supercharged. Other '58 Packards used a stock 289 with 210 bhp. Production was uniformly low: 159 wagons, 588 Hawks, 675 hardtops, and 1200 sedans.

With that, there was no point in going on, and once-proud Packard vanished from the scene (though its name continued in the corporate title until 1962). It was a great loss, but it did give Studebaker a new lease on life, though that make, too, would soon expire.