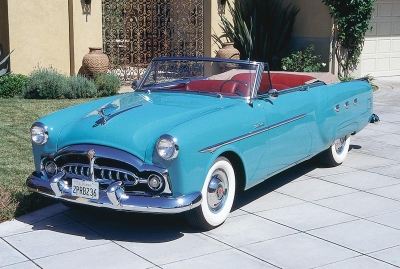 The 1952 Packard 250 convertible coupe reflected the first major Packard redesign since the end of the war.

Ushered in with the Packard Twenty-Third series of mid-1949 was Ultramatic, the only automatic transmission developed by an independent without outside help.

This combined a torque converter with multiple-disc and direct-drive clutches, plus forward/reverse bands. The car started from rest using the torque converter, then shifted into direct mechanical drive at about 15 miles an hour. Though much smoother than GM's rival Hydra-Matic, Ultramatic provided only leisurely acceleration, and frequent use of Low range for faster starts caused premature wear.

Also arriving with the Twenty-Third series was a mild facelift distinguished by a beltline spear on most models, plus new Deluxe-trim Eight and Super Eight sedans and coupes. The Super versions carried a 327-cid engine and the same eggcrate grille as corresponding Customs but cost about $1000 less, so Custom sales suffered mightily. So did Packard as a whole. The seller's market was ending, and production showed it, plunging to just under 42,400 units for the model year.

Packard finally managed a total redesign for 1951, adopting John Reinhart's squarish, but praiseworthy, "high-pockets" notchback shape -- a complete break with the "elephants." A new 122-inch chassis supported a "200" series of standard and DeLuxe two- and four-door sedans, plus a spiffy "250" convertible and Mayfair hardtop coupe, the latter body style a first for Packard. A 127-inch platform was used for "300" and Patrician 400 sedans.

Like the old One Ten, the 200s weren't traditional Packards even though they carried the same 288 engine as the previous standard Eight. The line even included a $2302 business coupe, $529 less than the cheapest '51 Cadillac. But with the market ended, the 200s couldn't hope to do well against established price rivals, and they didn't.

The "real" Packards of 1951 were the 250s, which did sell ­pretty well, and the regal 300 and Patrician. At just under $3700, the Patrician effectively replaced the broad Custom Eight line. But though very smooth and utterly reliable, the Custom's 356 engine cost too much to build in light of expected sales, so Packard's biggest '51 engine was the destroked 327, previously the middle powerplant and with nearly as much horsepower: 155 for Patricians and Ultramatic 250/300s, 150 otherwise.

Overall, Packard's new '51 package fared quite well -- probably because it was new in a year when little else was. Model-year production ended at 101,000, more than twice the dismal 1950 total. (Packard also built 401 "300" chassis that year for the professional car market and what remained of its once-thriving custom-body business.)

Unfortunately, 1952 production was down substantially, sliding to just under 63,000 units. Changes were few. The 200 business coupe was dropped, power brakes arrived as a (postwar) first-time option, and there were colorful new interiors in high-quality fabric and leather by fashion designer Dorothy Draper. Styling was virtually untouched, however. The most-obvious change was a different wing position for the traditional "pelican" hood ornament.

A far more significant change occurred in the executive suite during 1952. In May, aging president Hugh Ferry (who'd replaced George Christopher in 1949) stepped down in favor of James J. Nance, a market-wise hotshot recruited from Hotpoint to turn Packard around. That was sorely needed. By the time Nance arrived, Packard's Detroit plant was working at only 50 percent capacity. Incredibly, several long-time executives felt that was good enough, but Nance saw then what we all see now: At that pace, Packard was doomed.