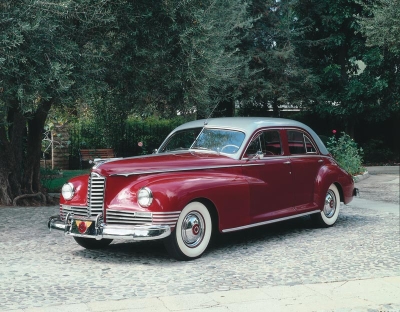 After building Rolls-Royce Merlin aero engines and power units for military vehicles and PT boats, Packard returned to peacetime as the only independent free of debt. But then came a decision that would ultimately prove fatal.

Instead of reverting to luxury cars alone, Packard continued to stress medium-price models in the One Twenty tradition. While such cars had been vital during the Depression, they simply weren't needed in the hectic sell-everything postwar economy, and they severely squandered what remained of Packard's grand-luxe image.

Still, disaster was a long way off in 1946, when Packard followed most other Detroit makes in reprising its final prewar line, though abbreviated. That year's low-priced Clipper Six sedan and coupe looked exactly like the Clipper Eight models, which included DeLuxe versions. All used the familiar 120-inch wheelbase.

Clipper Super and Custom sedans and coupes had the equally familiar 127-inch chassis save the seven-passenger Custom sedan and limo (which had a 148-inch wheelbase). Basic Eights retained the 282 engine with 125 bhp, Supers and Customs kept the 165-bhp 356 from '42, and the Six continued with its 105-bhp 245. Overdrive and Electromatic clutch returned as options. Customs were trimmed with plush broadcloth and leather upholstery, special carpeting, and beautiful imitation wood paneling. Packard moved more than 30,000 cars in 1946 and over 50,000 of the '47s, which were identical except for serial numbers.

There was just one problem. Most automakers were able to stretch their prewar tooling through 1948, then issue all-new postwar designs that were ahead of the Clipper in style. But Packard, despite its postwar financial health, couldn't afford to junk its prewar dies so soon because they hadn't been amortized over sufficient production.

Accordingly, Packard stylists loaded on heavy chunks of sheetmetal to give the Clipper a modern "flow-through-fender" effect. It also added 200 needless pounds in curb weight.

The result looked fatter too, aggravated by a short, squat grille -- eggcrate on Customs, bar-type on other ­models -- that was far-less-elegant than the slim prow of 1941-47. All this moved auto writer Tom McCahill to pronounce the '48 Packard fit for "a dowager in a Queen Mary hat." Many simply called it a "pregnant elephant."

Engine and chassis assignments altered somewhat for the '48 line of standard, DeLuxe, Super, and Custom Eights. Customs retained their 160-bhp 356 engine, but Supers got a new 327 unit with five main bearings and 145 bhp; standard Eights used a much squarer new 288 engine with 130 bhp. These powerplants carried through to May 1949 in the Twenty-Second Series. Then the Twenty-Third series appeared with horsepower raised to 135 for standards and to 150 for Supers.

As before, sedans and coupes were Packard's mainstays in 1948-50. Standards, DeLuxes, and Supers kept to 120-inch wheelbases, Customs to a 127-inch chassis; a 141-inch platform supported four new Super Eight long sedans and limos, while a 148-inch chassis continued under counterpart Customs. Packard also crafted a few long Custom commercial chassis, plus some six-cylinder 1948 platforms for taxi and export use.

Also new for '48 were Custom and Super convertibles and the novel four-door Station Sedan in the standard Eight series. The last, priced at $3425, had a wagonlike body made almost ­entirely of steel, though it employed structural wood at the tailgate and decorative timber on the doors. It was unusual for a Packard, which may be why it didn't sell too well: just 3864 copies through 1950. The Custom Eight convertible was Packard's priciest standard model tagged at $4295 for 1948-49, then $4520.