Packard Design Changes and the Darrin-Packards 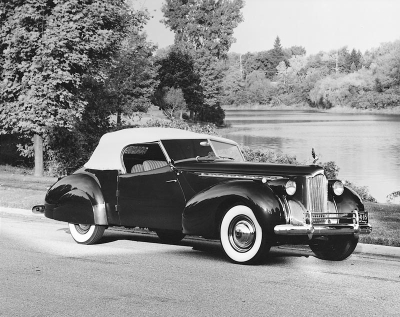 A 1940 Darrin convertible victoria, one of the striking Darrin-Packards that restored glamour to the company's line.

A definite factor in Cadillac's leap to luxury-league supremacy was its more-modern Harley Earl styling. True to tradition, Packard maintained a tall, formal look that seemed quite stuffy by 1939, not least because it hadn't changed much since the great design overhaul of four years before.

Super Eights offered the same two chassis, but models were reduced to cover a $1650-$2300 spread. The Twelve, however, still ran a very broad gamut of models and prices ($4155-$8355), including custom styles by Rollston and Brunn. However, the magnificent Twelve was in its final year; the Depression had rendered it an unnecessary anachronism. Only 5744 were built during its eight-year reign as queen of the line (including 1932 Twin Sixes).

More major styling adjustments occurred for 1940, when a new 160-bhp 356-cid engine bowed in an expanded Super Eight line divided between One Sixty and Custom One Eighty models. These spanned wheelbases of 127, 138, and 148 inches and a price band of $1500-$2900 with standard bodywork.

The new 356 was impressively quiet, what with nine main bearings and a crankshaft that weighed 105 pounds. It was also potent enough to push the lighter models to well over 100 mph. The 356 would power Supers through 1947 and Customs through 1950. Another new feature for 1940 was air conditioning. Packard was the first production car to offer it, though it was bulky and not as effective as later units.

Meantime, the low-priced Six was again a One Ten for 1940, but neither it nor the One Twenty was much changed mechanically. However, rumble-seat models were eliminated, and the One Twenty extended its coverage with four new DeLuxe-trim models: a sedan, club coupe and sedan, and convertible coupe in the $1160-$1300 price range.

A stunning exception to Packard's more-competitive 1940 price structure was a new quartet of rakish custom-built Darrin models, the work of renowned designer Howard A. "Dutch" Darrin.

Effectively filling the glamour gap left by the departed Twelve, these comprised a One Twenty convertible victoria, a Custom Super Eight One Eighty version on the same short wheelbase, and a long-chassis Custom Super convertible sedan and closed Sport Sedan. All ­boasted ground-hugging silhouettes enhanced by the complete absence of running boards (Dutch detested running boards, though they were fast-fading anyway). The victorias were exquisite: smooth, low, ideally proportioned, yet with just the right amount of proper Packard dignity.

The Darrin-Packards evolved from a handful of 1938-39 specials that Dutch had built at his Hollywood works for various celebrities, including actor/crooner Dick Powell. Strong response encouraged Dutch to convince Packard to catalog such wares on a special-order basis. In a clever ploy to do just that, he got the Powell car parked at the Packard Proving Grounds in the summer of 1939, where it was roundly cheered by dealers attending their annual sales meeting.

Save sectioned radiators and hoods, the Darrins wore unique body panels. The Sport Sedan was a handsome "gentleman's" car with a semblance of Bill Mitchell's 1938 Cadillac Sixty Special in its curved, blind-quarter roof, chrome-edged windows, and sharp beltline. But the real eye-catcher was the sleek victoria, with cut-down windshield and an abrupt kickup to the rear flanks from a gradually sloped doorline -- the famous "Darrin notch."