The Packard One Twenty 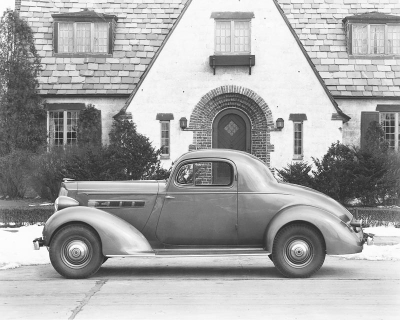 The 1935 One Twenty was the popular middle-priced car Packard was seeking.

The One Twenty was a dramatic departure for Packard. Bowing in seven models, the One Twenty cost a little more than half as much as the unmourned Light Eight -- $1000-$1100 -- perfect for those who'd always wanted a Packard but had never been able to afford one.

There were traditional hallmarks like the "ox-yoke" radiator and red hexagon wheel-hub emblems, but styling was updated, emerging conservative but contemporary with rounded contours, "potato-shape" windows, fullsome fenders, and a radiator raked 30 degrees from vertical -- all pretty daring for Packard.

Designed largely by former GM people, the One Twenty engine was a straightforward L-head eight of 257.2 cid and 110 bhp. Features included a heavily ribbed block, individual exhaust ports, ample water jackets, five main bearings, and counterweighted overlapping journals. It was a smooth engine, easy on gas, and granite strong. After 1935, a longer stroke yielded 282 cid and 120 bhp. Most One Twentys could reach 85 mph and do 0-60 in less than 20 seconds -- not bad for a 3500-pound prewar car.

For 1936, the One Twenty added a convertible sedan bearing "Dietrich" body plates, though Ray Dietrich personally had nothing to do with it; his name had been owned by the Murray Body Company since the early '30s.

The following year brought a station wagon, three DeLuxe closed models, and a 138-inch wheelbase sedan and limousine. The '37 Senior Packards joined the One Twenty in offering independent front suspension, grease fittings (instead of the Bijur automatic chassis-lube system), and hydraulic brakes. For 1938, when the One Twenty was simply called Eight (one year only), the standard wheelbase lengthened to 127 inches.

Though long and unfairly criticized as "cheap," the One Twenty was a genuine Packard in appearance, road behavior, and workmanship. To no one's surprise, it sold like nickel hot dogs. As a result, Packard rocketed to 12th in industry production for 1935, leaping from 8000 to nearly 32,000. And it kept right on soaring, reaching about 61,000 in '36 and 122,000 in '37. A sharp recession held 1938 volume to some 56,000, but the firm soon recovered, and output remained healthy until World War II.

Contributing to that 1937 record was an even less-expensive line, the new Six, called One-Ten for 1940-42. Arriving on a 115-inch wheelbase, it used what was basically an over-bored One Twenty eight with two fewer cylinders, which made for a 237-cid six with 100 bhp. Wheelbase stretched to 122 inches for 1938-39, when displacement went up to 245 cid, though horsepower was unchanged.

Offerings basically duplicated the One Twenty's, but prices averaged some $150 lower, so the One Ten outsold the One Twenty by 13-to-10 in 1937. Though its six wasn't as smooth or potent as the One Twenty eight, it did offer excellent mileage and adequate performance.

The One Ten completed Packard's transformation from a ­pur­veyor of virtually handmade luxury cars to one of Detroit's top-10 producers. Of course, the firm still sold regular and Super Eights and opulent Twelves through decade's end, but at a rate of only some 6000 a year. The One Twenty was far and away the breadwinning eight, costing some $1200 less than a standard Eight. Testifying to its success, the Super Eight lost its 385 engine after 1936, demoted to the 320 unit of the standard Eight, which itself disappeared after 1937, though not in name.

But the rather small and dumpy One Ten/Six was by no means a Packard in the traditional sense. Perhaps the firm had become too greedy for sales, blinded by George Christopher's push for ever-higher production.

Regardless, by the end of the '30s, Cadillac was in firm charge as the sales and prestige leader of the high-dollar class. Many people who previously wouldn't have been seen in a Caddy now bought them instead of big Packards, which had been upstaged by the low-cost One Ten/One Twenty that looked almost the same, at least in front.