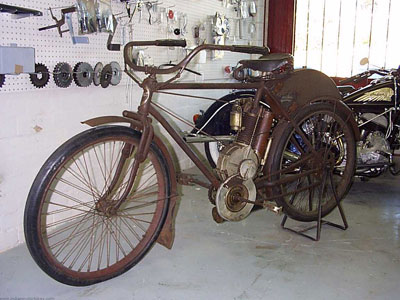 ­Motorcycl­es evolved from the "safety" bicycle, a bicycle that offered many advantages in stability, braking and ease of mounting. The essential features of a safety bike included:

­The first bicycle to provide all of these features and gain market acceptance was the Rover Safety, designed by John Kemp Starley in 1885. After the Rover pattern took over the market, safety bicycles were simply called "bicycles."

It didn't take long for someone to take the user-friendly safety bicycle design and strap on an internal combustion engine. The first to do so successfully was Gottlieb Daimler, who is credited with building the first motorized bicycle -- or motorcycle -- in 1885. Daimler's motorcycle included a single-cylinder Otto-cycle engine mounted vertically in the center of the machine. It also had one wheel in front, one wheel in back and a spring-loaded outrigger wheel on each side for added stability. Its chassis consisted of a wooden frame and wheels with wood spokes and iron rims. Such designs were called "boneshakers" because of the rough, jarring ride they delivered.

The next notable motorcycle was designed in 1892 by Alex Millet. Millet incorporated the basic safety bicycle design, but added pneumatic tires and a five-cylinder rotary engine built into the rear wheel. The cylinders rotated with the wheel, while the crankshaft formed the rear axle.

The Hildebrand & Wolfmueller was the first successful production two-wheeler, patented in Munich in 1894. More than 200 vehicles made it onto the road. Hildebrand & Wolfmueller decided to cool their parallel-twin engine with water, which required a water tank and radiator. Their solution was to build the coolant system into the top of the rear fender.

In 1895, DeDion-Buton introduced an engine that would revolutionize the motorcycle industry by making mass production possible. The DeDion-Buton engine was a small, light, high-revving four-stroke engine that could generate half a horsepower. Although DeDion-Buton used the engine in its motortricycles, motorcycle manufacturers around the world copied and used the design.

Carl Oscar Hedstrom and George M. Hendee founded the Hendee Manufacturing Company in 1900 with the goal of producing a "motor-driven bicycle for the everyday use of the general public." In 1901, they rolled out the Single, a 1.75-horsepower motorcycle that could reach a top speed of 25 miles per hour. They also decided to roll out a brand-new trade name for their motorcycles. That name was Indian, and it was the world's best-selling motorcycle until World War I.

Founded by William S. Harley and Arthur Davidson in 1902, the Harley-Davidson Motor Company went on to produce the most influential machines of the industry. Its first models used the basic DeDion-Buton layout and borrowed heavily from chassis designs already employed by other motorcycle manufacturers, including Indian, Excelsior and Pope. The Harley-Davidson eventually made its presence known with its sturdy, strong and durable machines. In 1908, Walter Davidson, riding what came to be known as the Silent Gray Fellow, scored a perfect 1,000 points at the 7th Annual Federation of American Motorcyclists Endurance and Reliability Contest. Soon after, Walter Davidson, Arthur's brother, set the FAM economy record at 188.234 miles per gallon. By 1920, Harley-Davidson was the largest motorcycle manufacturer in the world. For more information, check out How Harley-Davidson Works.