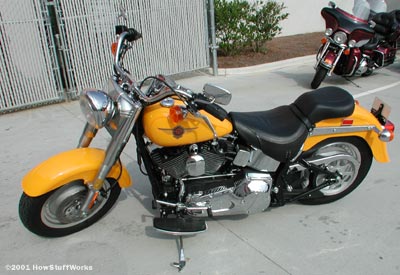 This Harley-Davidson Softail has a swingarm rear suspension.

The motorcycle chassis consists of the frame, suspension, wheels and brakes. Each of these components is described briefly below.

Motorcycles have a frame made of steel, aluminum or an alloy. The frame consists mostly of hollow tubes and serves as a skeleton on which components like the gearbox and engine are mounted. The frame also keeps the wheels in line to maintain the handling of the motorcycle.

The frame also serves as a support for the suspension system, a collection of springs and shock absorbers that helps keep the wheels in contact with the road and cushions the rider from bumps and jolts. A swingarm design is the most common solution for the rear suspension. On one end, the swingarm holds the axle of the rear wheel. On the other end, it attaches to the frame via the swingarm pivot bolt. A shock absorber extends upward from the swingarm pivot bolt and attaches to the top of the frame, just beneath the seat. The front wheel and axle are mounted on a telescoping fork with internal shock absorbers and internal or external springs.

­Motorcycle wheels are generally aluminum or steel rims with spokes, although some models introduced since the 1970s offer cast wheels. Cast wheels allow the bikes to use tubeless tires, which, unlike traditional pneumatic tires, don't have an inner tube to hold the compressed air. Instead, the air is held between the rim and the tire, relying on a seal that forms between rim and tire to maintain the internal air pressure.

Tubeless tires are less likely to blow out than a tube-type tire, but on rough roads, they can be a problem because even a small bend in the rim can cause a deflation. Tires come in a variety of designs to match the needs of terrain and driving conditions. Dirt bike tires, for example, have deep, knobby treads for maximum grip on dirt or gravel. Touring bike tires, made of harder rubber, usually provide less grip but last longer. The tires of sportbikes and racers (generally steel-belted radials) deliver astonishing gripping power, especially considering the small area that is in contact with the road surface.

Parts of a disc brake
HowStuffWorks

The front and rear wheels on a motorcycle each have a brake. The rider activates the front brake with a hand lever on the right grip, the rear brake with the right foot pedal. Drum brakes were common until the 1970s, but most motorcycles today rely on the superior performance of disc brakes. Disc brakes consist of a steel braking disc, which is connected to the wheel and sandwiched between brake pads. When the rider operates one of the brakes, hydraulic pressure, acting through the brake line, causes the brake pads to squeeze against the disc on both sides. Friction causes the disc and the attached wheel to slow down or stop. Brake pads must be replaced periodically because the pad surfaces wear away after repeated use.

Seats on motorcycles are designed to carry one or two passengers. They are located behind the gas tank and are easily removable from the frame. Some seats have small cargo compartments underneath or behind them. For more storage, saddlebags -- either hard plastic boxes or leather pouches -- can be installed on either side of the rear wheel or over the rear fender. Large motorcycles can even tow a small trailer or pull a sidecar. The sidecar has its own wheel for support and may have an enclosed seating compartment to accommodate a passenger.

Next, we'll see what it's like to drive a motorcycle.