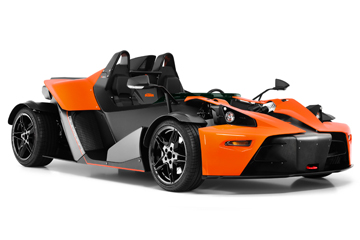 What do you give the car enthusiast who has everything? How about something so good, you couldn't even buy it in the United States -- until now, that is: the KTM X-Bow. Hailing from Austria, it's the first car from sport bike manufacturer KTM.

The X-Bow (pronounced "crossbow") is small and aggressive, with a silhouette that vaguely resembles a Lotus. The longer you look, though, the more differences come to light. Most obvious is that the X-Bow is essentially an open-air go-kart, providing an "unfiltered" experience for "purists," according to the car's North American distributor, British Racing Group, L.L.C.

Deep-pocketed track enthusiasts have been waiting since 2008 to get their butts in the seat of the X-Bow, but KTM never finalized its long-rumored plans to import it. British Racing Group L.L.C., a boutique dealership chain that specializes in locating and selling hard-to-find cars, has taken over stateside sales efforts. They'll dodge sticky legality issues by marketing the X-Bow as a kit car -- in other words, they'll sell you the shell. Buying and installing the make-it-go parts is your problem (but it's a plight rather common with kit cars). Specifically, they say, "The North American specification KTM X-Bow is classified as a special construction vehicle by the EPA, NHSTA and state departments of transportation. As such, it is sold without engine and transaxle" [source: British Racing Group, L.L.C.].

British Racing Group's terms also include legalese that says, basically, just because they'll sell it doesn't mean the buyer will necessarily be able to drive it, at least according to national and state governmental regulations. (However, it's cleared for road use in most of the European Union, as well as the United Arab Emirates.)

The difficulties of owning the X-Bow seem only to contribute to its cult-like status. It's noteworthy that the X-Bow has created such a stir despite its modest underpinnings. Though the car comes unpowered, it was designed to work with a specific engine -- a rather common 240 horsepower four-cylinder that's borrowed from the Volkswagen-Audi family (more on that later). Though it's rather sprightly in a spartan car, the relatively low power output might be surprising for a track toy that sits just shy of a six-figure price tag. Suffice it to say, the numbers alone don't tell the whole story.

So, what makes the X-Bow so sought after -- is it just the "can't have it" factor? On the next page, we'll talk more about the X-Bow's design. 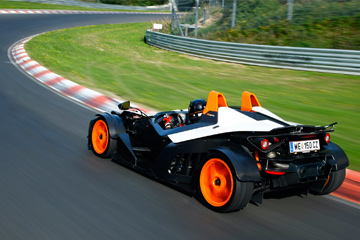 KTM is known for its racing bikes, so it's little surprise that the X-Bow performs much like a four-wheeled motorcycle. But designing a car requires a slightly different skill set, so KTM enlisted a team of experts to help ensure the X-Bow would be the leader of the pack. KTM borrowed the exhaust from its family of bikes, and in fact, that's the only KTM-produced element of the car. All other major components and features are sourced from different suppliers.

The chassis was engineered by Dallara, an Italian racecar design firm that specializes in lightweight and high-tech materials. The tub-like cockpit is constructed of a carbon fiber variant that, according to The Telegraph, is actually called "industrial fiber." In the front, the cockpit is strengthened with racing-spec carbon fiber crash reinforcements and the exhaust provides support for the rear. This construction makes the X-Bow twice as resistant to twisting as a steel-bodied convertible. The 240 horsepower Volkswagen-Audi 4-cylinder FSI engine also rounds out the rear.

The X-Bow's been available around its home turf since 2008, so there's been plenty of opportunity for European and American motoring press to weigh in. The car's tub-like design is a popular target for sharp commentary. Climb into the X-Bow (not a graceful task, according to Motor Trend) and settle into the nonadjustable, hard molded seat -- the controls must be adjusted to reach the driver. Paul Horrell of Motor Trend said the lack of a roof and windshield is jarring, especially at track speeds: Protection comes only from the driver's helmet. And without a windshield and roof, there's no need for the A-pillar that typically forms the support between those panels, providing unobstructed front and peripheral views. A KTM motorbike instrument cluster is mounted nearby.

Get in shape before you attempt to whip the X-Bow around a track: It's absent the grace of power steering and power brakes. The suspension provides a rough, yet purposeful ride, allowing the driver to receive plenty of feedback from the road surface; however, it's generally "very civilized" [source: Horrell]. Prospective American buyers can rest easy, though: the X-Bow is available in both left-hand and right-hand drive formats.

Now that you know how the X-Bow feels on the road (at least, according to the pros), you might be wondering what's behind the carbon fiber facade. Keep reading for the X-Bow's vital stats. 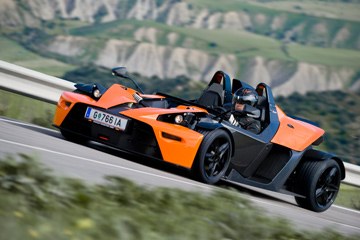 KTM has a good grasp of its strengths and weaknesses -- when it came time to power up this high-priced go-kart, it went to Audi for the engine and drivetrain rather than attempt to develop their own. The Audi 2.0-liter turbo direct-injected powerplant mates to a 6-speed manual transmission. It all adds up to 240 horsepower, which delivers 62 miles per hour (100 kilometers per hour) in just 3.9 seconds. So, let's get this out of the way up front: Yes, this engine and transmission combo can be obtained at any VW dealership in the United States, already installed in a fully-equipped street-legal passenger car, for roughly a third of the cost of the X-Bow. But then, you'd be an average car shopper. And even though VWs and Audis are jolly fun on a track, wouldn't you rather be there with a mischievous little X-Bow?

Most of the car's pep can be attributed to its size and weight. All those "missing" features -- like doors, a roof, a windshield, a trunk and cabin creature comforts -- were trimmed with the goal of saving pounds and ounces. And 240 horses can get up and go a lot faster when they've got a smaller cart to pull. British Racing Group also notes that its emissions and fuel economy -- about 39 miles per gallon (16.6 kilometers per liter) -- are similar to those of a small passenger car.

The X-Bow is available in a few different trims to suit individual racing needs. The least uncomfortable option is the Street model, and from there, each additional trim level shaves a few ounces of curb weight while adding high-end race accoutrements (like racing harnesses, top-of-the-line suspension components and the ever-sobering fire extinguisher). A complete X-Bow in Street trim (including drivetrain) is expected to total about $95,000 in the United States.

Want to brush up on your driving skills before your new X-Bow arrives? The next page will pave the road for more racing and high-end car insight.