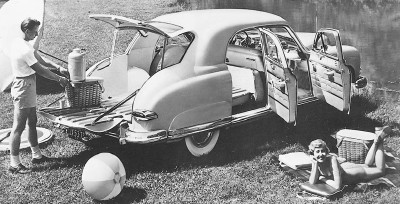 Customers paid $200 more for the 1949 Kaiser Custom Vagabond with leather upholstery than they did for the similar Kaiser Special Traveler.

A scheduled facelift gave the 1949 Kaisers a broader, shinier grille and larger taillights. Custom was retitled DeLuxe, and gained the 112-bhp engine as standard. Four new models arrived. Two were utility sedans, an idea from Henry Kaiser himself. They were much like the standard article save a double-door rear hatch and fold-down back seat.

The economical Special Traveler arrived at $2088, the leather-upholstered Custom Vagabond at $200 more. In effect, these were a cost-saving substitute for a true station wagon, one of many things K-F never would get around to building.

Kaiser's other two '49 newcomers were a four-door convertible and the Virginian four-door hardtop, the first postwar use of those body types. Both were richly appointed DeLuxe offerings with excellent visibility thanks to the lack of steel B-posts, though both retained vestigial pillars with glass panes. The convertible also carried fixed side-window frames and a heavily braced X-member frame for added structural strength.

Unfortunately, the Kaisers cost as much as some Cadillacs -- $3000-$3200 -- so only a handful were produced: an estimated 946 Virginians and just 54 convertible sedans. Those that didn't sell as '49s were given new serial numbers for 1950.

From the first, K-F offered an unusually wide range of paint, trim, and upholstery variations. This was the work of Carleton Spencer, who took some initial cues from research on home interiors done by House & Garden magazine. The results were hues like Indian Ceramic (a vivid pink), Crystal Green, Caribbean Coral, and Arena Yellow.

These and other color names were actually written in chrome script on the front fenders of '49 Kaiser Customs. Detroit, as a whole, listed 218 exterior colors for '49; 37 were K-F's. Of the industry's 150 different 1949 interior fabrics, K-F owned 62.

The original Kaiser dashboard was an inexpensive design with horizontal gauges. For 1949, this gave way to a more-ornate panel with a giant speedometer ahead of the driver and a matching clock on the passenger's side.

DeLuxe dashboards sparkled with chrome, stainless steel, and a massive ivory steering wheel with a big semicircular chrome horn ring. Such flash combined with colorful paint and fashion upholstery did much to doll up what was otherwise an unchanged and surprisingly fast-aging design.

And therein lay the seeds of disaster. Chairman Henry Kaiser boldly tooled up for 1949 volume of 200,000 cars -- against the advice of his marketwise partner. Joe Frazer realized the company couldn't sell nearly that many against all-new 1949 Big Three competition, and had urged a holding action until K-F released its own new models, then scheduled for 1950. But Henry wouldn't have it.

"The Kaisers never retrench," he stormed. By now, Kaiser's people had far more influence in company affairs than Frazer's, so Joe yielded the presidency to Kaiser's son Edgar, remaining on the board only for appearance sake. By year's end, he was gone.

Henry should have listened. Instead, K-F's 1949 calendar-year sales were a fraction of the number planned: only some 58,000. About 20 percent couldn't be sold, and were thus ­recycled with new serial numbers as 1950 models. Though it's impossible to separate model-year "production," 1949 units account for about 84 percent of the total, according to experts.