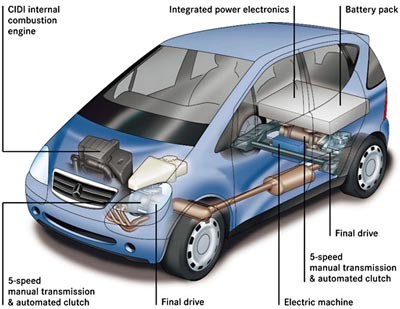 You can combine the two power sources found in a hybrid car in different ways. One way, known as a parallel hybrid, has a fuel tank that supplies gasoline to the engine and a set of batteries that supplies power to the electric motor. Both the engine and the electric motor can turn the transmission at the same time, and the transmission then turns the wheels.


Parallel hybrid car
Move your mouse over the parts for a 3-D view.

Take a look at the diagram of the series hybrid, starting with the fuel tank, and you'll see that all of the components form a line that eventually connects with the transmission.


Series hybrid car
Move your mouse over the parts for a 3-D view.

The structure of a hybrid car harnesses two sources of power to increase efficiency and provide the kind of performance most of us are looking for in a vehicle. In the next section, we'll see how it accomplishes this.