A Brief History of Hearses 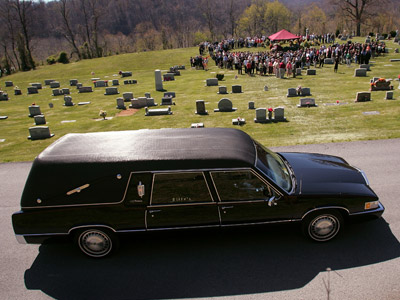 Sayers and Scovill introduced the landau-style hearse in the 1930s. This form of hearse is still popular today.
Scott Olson/Getty Images

In the funeral industry, a hearse isn't usually called a hearse. It's referred to as a funeral coach. Funeral directors find that term a bit more dignified and a little less frightening than the more familiar word. In this article, however, we'll continue to refer to these vehicles as hearses, because that's how most of us know them. The word "hearse" comes from the Middle English "herse," which referred to a type of candelabra often placed on top of a coffin. Sometime in the 17th century, people starting using the word to refer to the horse-drawn carriages that conveyed the casket to the place of burial during a funeral procession.

Hearses remained horse-drawn until the first decade of the 20th century, when motorized hearses began to appear. Nobody's quite sure what year these motorized hearses were first put into use, but it was most likely between 1901 and 1907. Here's another interesting piece of info: The first hearse motors were electric. The first hearse built with an internal combustion engine didn't appear until 1909, at the funeral of Wilfrid A. Pruyn. The undertaker responsible was H.D. Ludlow, who commissioned a vehicle to be built out of the body of a horse-drawn hearse and the chassis of a bus. This new type of hearse was quite popular with the funeral home's wealthier customers and Ludlow used it for 13 more funerals before replacing it with a larger model.

Ludlow's innovation may have been popular with the public, but most funeral directors found motorized hearses too expensive -- about $6,000 per hearse. A comparable horse-drawn hearse of that period would have cost about $1,500. But, as prices dropped and internal combustion engines became more powerful, those same funeral directors realized that speedier hearses would mean more funerals per day. So, despite the extra cost, gas-powered hearses became the norm by the 1920s.

In the same year that Wilfrid A. Pruyn was buried, the Crane and Breed Company of Cincinnati, Ohio, became the first manufacturer of hearses. Their vehicles purred along at a brisk 30 mph (48 kilometers per hour), fairly fast in those days for a car of any kind. The four-cylinder engine generated just 30 horsepower and used a three-speed transmission. Other companies soon began to offer hearses of their own. These first gasoline-driven hearses imitated the boxy design of the horse-drawn variety, but in the 1930s the longer, landau-style hearse was introduced by Sayers and Scovill, and its sleek, limousine-like form remains popular today.

It was not uncommon in the early and middle parts of the 20th century for hearses to serve as both funeral coach and ambulance, depending on the immediate need that the community had for them. Such vehicles, once common in small towns, were known as combination coaches. Regulations for ambulances became stricter after the 1970s, however, and now it's rare for one vehicle to serve in both roles.

So how are hearses made? We'll look at that subject on the next page.